Stealing the powers of speedsters

Savitar is a supervillain and an antagonist in DC Comics appearing in the Flash comics. He is an immensely powerful speedster who leads a cult that worships the Speed Force. He desires to drain any enemy speedster of their powers in order to live up to his name as a god. He has fought many speedsters, including Wally West, Jay Garrick, and Barry Allen.

Savitar was an unnamed Cold War pilot working for a third-world nation. When he was testing a supersonic fighter jet at its top speed, his plane was struck by what he thought was lightning, therefore forcing him to crash into hostile territory. After discovering that he could defeat his enemies while at super-speeds, he then named himself after the Hindu God of Motion, and dedicated his life to unlocking the secrets to the Speed-Force. As Savitar studied, he discovered new powers that no other living speedster has mastered, which included protecting himself in a null-inertia force field.

Savitar became the leader of a cult in his search of more knowledge that he can use in accomplishing his goals. He sought out his followers, the Thunderbolt Agents, to strip most of Earth's speedsters of their link to the Speed-Force, transferring their speed into the Thunderbolt Agents. He sent a few of these agents to attack Wally West, but his direct link to the Speed-Force prevented Savitar from stealing his speed, therefore foiling his plans. Hell-bent on at least destroying Flash's world in retribution, he led the Flash on a worldwide race of destruction, until Flash chose to give Savitar what he wanted: union with the Speed-Force by trapping him in the dimension.

A heavily adapted iteration of Savitar appears as the main antagonist in Season 3 of The CW superhero TV series, The Flash. This version is an armored speedster who is later revealed to be a scarred time remnant of a future Barry Allen/The Flash. He is the result of a causal loop that involves him killing Iris West to ensure his own future creation.

He is portrayed by both Grant Gustin (as Barry) and Andre Trictoteux (whilst armored), while voiced by Tobin Bell. 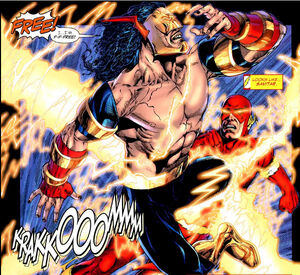 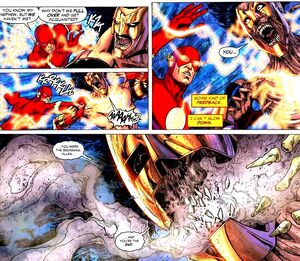 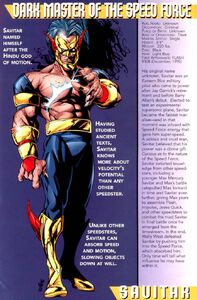 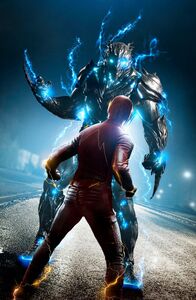 Savitar appearing on The Flash. 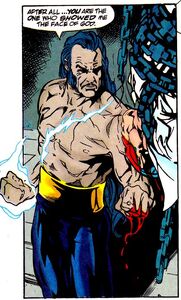