Spying on the nascita crew for Namba (formerly).

Sawa Takigawa is a supporting antagonist turned protagonist in Kamen Rider Build. She is a Touto journalist seeking to uncover the mystery behind the Smash and Kamen Rider Build. Secretly, she is actually a spy for Namba Heavy Industries Ltd. and is collecting information on Build for them. However, she later defects from Namba and begins helping Build and his friends.

She was portrayed by Yukari Taki.

Sawa grew up in an orphanage where she was raised as one of the Namba Children. Alongside the other children, Sawa was trained as a spy and conditioned to have complete loyalty to Namba.

Sawa interviewed Gentoku Himuro about the Smash, where she asked for his thoughts on the rumored Kamen Rider. Gentoku instead suggested "continuing the conversation" at the nearby hotel, but Sawa predictably rebuked him.

Later that night, Sawa was saved from the Needle Smash by Kamen Rider Build. As he canceled his transformation and walked away, he dropped a nascita card, giving Sawa a clue as to his true identity.

The next day, she visits Sento's hideout after Soichi accidentally left the door open. She promises to Sento not to reveal his identity in exchange for him letting her interview him.

However, she was later revealed as a spy for Namba, secretly providing him with photographs of all of Build's Best Match forms thus far. However, Misora finds the audio-recording bug Sawa had planted in their hideout and realizes she is not who she seems.

She soon discovers that her bug is missing, and is confronted by Misora. Sawa attempted to convince Misora that the bug was just a habit for her reporting, but Misora remained unconvinced. Sawa then uses Ryuga's arrival as an opportunity to escape and reports to Namba that her cover has been compromised. She is then captured by Faust and turned into the Stretch Smash. After this was recorded on video, Faust sent it Sento and set her loose in the city, Build tried to fight her off as Build KeyDragon, but the power proved to much for him and he was forced to cancel the transformation. Fortunately for him, Ryuga became Cross-Z and defeated her in one blow before Sento extracted her Smash essence. Sawa then confessed to having been a spy.

Back at nascita, Sawa delves into more detail about her nature as a spy for Namba, and supplies them with a conversation between Namba and Night Rogue she secretly recorded using a voice recorder in her necklace, as well as information on the Pandora Box's current location. She was then chained to a chair in Sento's lab to prevent her from escaping, while Sento and Ryuga went to investigate. She was later unchained by Misora when the two Riders returned.

Sawa later went to visit the hospitalized Taizan Himuro in a bid to convince him that there is connection between Faust and the Touto government. However, Taizan received information that the Touto government is launching an operation to wipe out Faust, causing him to doubt Sawa's report was disproved on the spot and for security to be sent to arrest her, but Sawa escaped.

Sawa was later blackmailed by Namba, who was holding the Nabeshima family hostage, into providing him with information on all of Build's forms so Kamen Rider Rogue could use the information to beat Build in the representative battle and allow Seito to claim the Pandora Box. Going to Sento, Sawa revealed the truth about her past and that Namba was now blackmailing her. Forgiving Sawa for lying to him, Sento conspired with Sawa to fool Namba and Seito by having her leak information on all of Build's forms but one, his TankTank form, which Sento had only just invented and Namba wasn't aware of.

During the representative match between himself and Rogue, Build fought Rogue in his RabbitRabbit form and allowed himself to be beaten down while Kamen Rider Grease went to rescue the Nabeshimas. Once the Nabeshima family were safely secure, Build revealed his TankTank form and promptly defeated Rogue, winning the match for Touto. 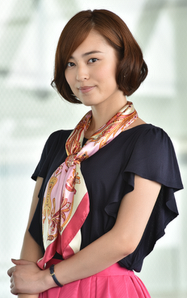 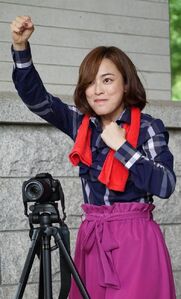 Sawa with her camera set up. 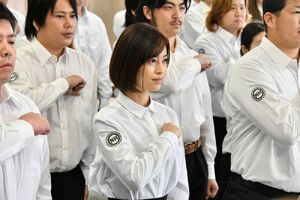 Sawa as one of the Namba Children. 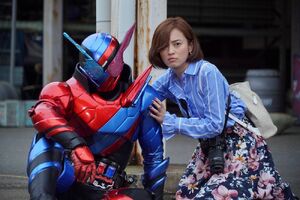 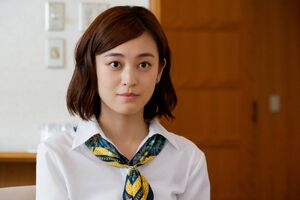 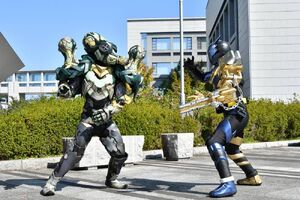