Earn an easy life by killing and eating people.

Sawney Bean is a legendary Scottish cannibal who (according to many stories) lived with his inbred family in an unconfirmed area of land (normally said to be in or around Ayrshire (most often the Galloway Hills)) where he would hunt down his human prey and murder them before he and his clan devoured them, although the story of Sawney Bean is highly dubious and questionable it has remained one of Scotland's most popular ghost stories and the name Sawney Bean is heavily associated with barbarism and evil.

Legends state that Sawney and his clan killed more than one thousand people throughout their lifetime, excluding the numerous bodies they also dug up and consumed via grave-robbing. If this number is correct, Sawney would easily be one of the most prolific serial killers in history, but many suspect the number is either entire fiction or greatly exaggerated (as noted previously).

According to The Newgate Calendar, Alexander Bean was born in East Lothian during the sixteenth century. His father was a ditch digger and hedge trimmer, and Bean tried to take up the family trades but quickly realized that he had little taste for honest labor.

He left home with a vicious woman who shared his inclinations. The couple ended up at a coastal cave in Bannane Head (which name, "Bannane", is an earlier form of the modern "Beane"), near Galloway (now South Ayrshire) where they lived undiscovered for some twenty-five years. The cave was two hundred yards deep and during high tide, the entrance was blocked by water and is said to be today's Bannane Cave, located between Girvan and Ballantrae in Ayrshire.

Their many children and grandchildren were products of incest and lawlessness. The brood came to include eight sons, six daughters, eighteen grandsons, and fourteen granddaughters. Lacking the gumption for honest labor, the clan thrived by laying careful ambushes at night to rob and murder individuals or small groups. The bodies were brought back to the cave where they were dismembered and cannibalized. Leftovers were pickled, and discarded body parts would sometimes wash up on nearby beaches.

The body parts and disappearances did not go unnoticed by the local villagers, but the Beans stayed in the caves by day and took their victims at night. The clan was so secretive and quiet that the villagers were unaware of 48 murderers living nearby.

The crimes of the family didn't spare the dead either as the family frequently raided graves and cemeteries for bodies, some of which would be discovered in various states of mutilation.

As a more significant notice of the disappearances was taken, several organized searches were launched to find the culprits. One search took note of the telltale cave but the men refused to believe anything human could live in it. Frustrated and in a frenetic quest for justice, the townspeople lynched several innocents, and the disappearances continued. Suspicion often fell on local innkeepers since they were the last to see many of the missing people alive.

One fateful night, the Beans ambushed a married couple riding from a fair on one horse, but the man was skilled in combat, deftly holding off the clan with sword and pistol. The clan fatally mauled the wife when she fell to the ground in the conflict. Before they could take the resilient husband, a large group of fairgoers appeared on the trail and the Beans fled.

With the Beans' existence finally revealed to the world, it was not long before King James VI of Scotland (later James I of England) heard of the atrocities and decided to lead a manhunt with a team of 400 men and several bloodhounds, soon finding the Beans' previously overlooked cave in Bannane Head. The cave was rife with human remains, having been the scene of hundreds of murders and cannibalistic acts.

The clan was captured alive and taken in chains to the Tolbooth Jail in Edinburgh, then transferred to Leith or Glasgow where they were promptly executed without trial; the men had their genitalia cut off, hands and feet severed and were allowed to bleed to death, and the women and children, after watching the men die, were burned alive (this recalls, in essence, if not in detail, the punishments of hanging, drawing and quartering decreed for men convicted of treason while women convicted of the same were burned. Presumably—whether or not the story had an actual basis—cannibalism was considered the equivalent of treason).

The town of Girvan, located near the crime scene, has another legend about the cannibal clan. It is said that one of Bean's daughters eventually left the clan and settled in Girvan, where she planted the Hairy tree. After her family's capture, the daughter's identity was revealed by angry locals who hanged her from the bough of the Hairy Tree.

Legend of Sawney Bean and His Clan in Popular Culture

Largely due to the graphic and highly grotesque nature surrounding the cannibal clan, Sawney Bean and his lot have become a minor, yet noticeable influence in fiction, primarily in the horror genre. 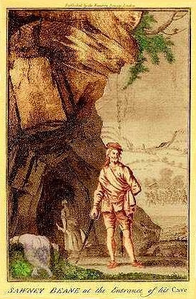 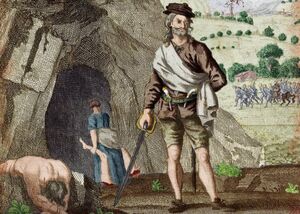 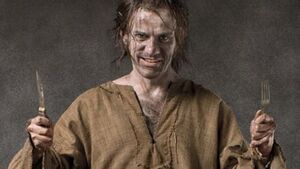 Sawney Bean as he appears in Edinburgh Dungeons