Tragic Kunoichi
Saya (in Japanese: サヤ, Saya) is an antagonist in Naruto. She is a kunoichi from Sunagakure and a teammate of Sana and Mamushi.

Saya's appearance is visually like a gothic lolita, complete with her light blue hair in two ponytails with bangs framing on both cheeks and wearing a red and purple kimono with her hem shredded, a light grey corset, a pair of separate, furisode-like sleeves in the same color. She also has a Suna forehead protector backwards and uses it as a ribbon tied at the middle in a bow, pointing straight up. Her fingernails are polished in black. Her most striking feature, however, is the makeup she puts around her yellow-pupiled eyes and has light purple lipstick. Red in color, it gives a vague appearance of the Toad's Perfect Sage Mode.

Saya is a very arrogant, dangerous, malevolent and sadistic kunoichi, revelling in finding new prey; this also extends to her teammates if they displease her. She is also very domineering, making her teammates refer to her as "Lady" (お嬢さま, Ojō-sama) and follow all her orders. She has a strong superiority-complex, believing herself superior to her enemies and refuses to believe herself capable of ever losing. When people challenge that view, she enters a hysterical state, compelled to make the person pay. Saya is also shown to have a very strong attachment to her ninja-puppet and all things she deems cute, her attachment to her puppet extends to the point of masqurading like it for a prolonged period of time.

In Naruto's Footsteps: The Friends' Paths

Saya, alongside her team, participated in the joint Chūnin Exams. She and her team were one of the few who managed to qualify for the second round. The next day, the second exam proctor — Temari, announced the start of the second round taken place within Demon Desert.[1] On the third day of the second exam, with the goal of having to pass by obtaining an Earth and Heaven scroll from an enemy team, Saya and her team found Team Asuma. Finding a liking in Sakura Haruno and Ino Yamanaka's appearances, she decided to take them on personally while leaving the less-desirable Chōji Akimichi to her teammates. She quickly obtained a hair sample from Ino and used her technique to attack Sakura through her own teammate. As Chōji began overwhelming Saya's teammates with his size, Saya broke her hold on Ino and turned her technique on Chōji. As Ino realized the nature of Saya's technique, she entered Chōji's mind to face Saya, during which, Saya had Chōji attack Sakura.

Ultimately, Ino succeeds in expelling Saya from Chōji's mind, much to Saya's horror. Refusing to believe she lost to anyone, Saya went hysterical and clutched her doll as Chōji regained himself and attacked her. At the last second, Saya substituted herself with her puppet and retreated like her team. Once she regrouped with her team, determined to make Ino pay for humiliating her, Saya planned to hypnotize the Konoha-nin team into being her slaves. Her team soon found and attacked the exhausted Team Asuma, having Sana and Mamushi strike in unison with her. Despite this, Sakura defeated Saya and her team with a single punch to the ground, sending Saya's team spiraling away, with her still denying she lost.

Later, Saya's team arrived at the main building for the conclusion of the second exam. However, the Chūnin Exams were ended early before starting the finals due to controversy happening in the second exam. Instead, it was decided by Gaara that a report on each participant would be sent to their respective village leader for them to decide if they would be promoted. 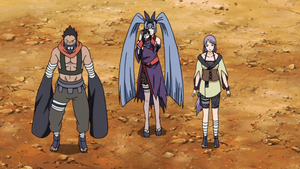 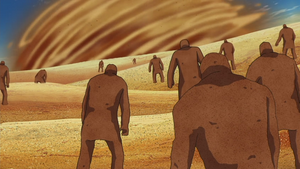 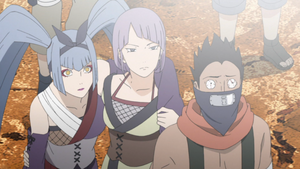 Saya and her teammates listening to Gaara's speech.