Stone of the Earth

Sayo Kadoya is the unwitting secondary antagonist of All Riders Vs. Dai-Shocker. She is Tsukasa's younger sister and is protected by Nobuhiko Tsukikage. She is the one who allows for Dai-Shocker's travel between the A.R. Worlds, due to her possession of the Stone of the Earth. She later betrays her brother after being coaxed by Tsukikage and becomes High Priestess Bishium, serving as his right-hand woman.

She was mainly portrayed by Moe Arai, with Momoka Ishii playing her as a young child.

When she and Tsukasa were kids, Tsukasa would travel through dimensional worlds into other A.R. Worlds through portals Sayo created while Sayo stayed cooped up in her room. Being left alone while her brother was traveling through dimensions led Sayo to eventually develop resentment and envy towards him for not being able to leave the Kadoya household like he was. After Tsukasa became the Great Leader of Dai-Shocker, Sayo's dimensional portal making abilities were exploited by Dai-Shocker to enable their multiversial conquest. Tsukasa later mysteriously disappeared due to losing his memories as a side effect of travelling through worlds and left Sayo behind.

Tsukasa later returned and met Sayo and their butler, Nobuhiko Tsukikage again. After Tsukasa resumed his role as leader of Dai-Shocker and seemingly defeated all the Kamen Riders, Tsukikage revealed himself to be Shadow Moon and usurped control of the organization, manipulating Sayo into hating Tsukasa and using the stone to become High Priestess Bishium.

In the final battle between the Kamen Riders and Dai-Shocker, Sayo hypnotizes Yusuke Onodera, the A.R. Kamen Rider Kuuga, and forces him to attack Decade. Tsukasa desperately tries to reach out to his sister, saying she is only being used by Tsukikage and that she can really leave and "fly" if she wants to, but Tsukikage insists that she cannot leave and is stuck where she is. However, Sayo then realizes that she was being used and destroys the Stone of the Earth, freeing Yusuke from her control. After the Dai-Shocker Castle was destroyed and Dai-Shocker's ultimate weapon, King Dark, was defeated, Sayo embraces Tsukasa and makes amends with him, saying that she too plans to leave for other A.R. Worlds at some point. 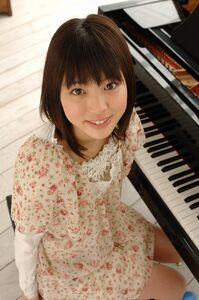 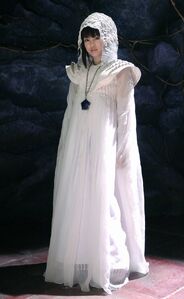 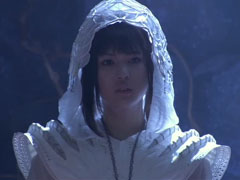 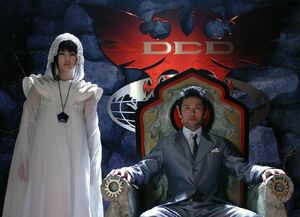