Witch of the Woods

Worshipping and sacrificing to the Old Gods.

She is a savage immortal witch and a practitioner of prehistoric Celtic religion and worshipper of Old Gods. Scáthach's corrupting influence is directly responsible for several colonial incidents, most notably the disappearance of the Roanoke colony. Chronologically, she is the first Supreme Witch and the one behind the actions of Tomasyn White, the Butcher.

In the re-enactment scenes of My Roanoke Nightmare, she is portrayed by singer Lady Gaga, who also portrayed the Countess Elizabeth Johnson in another AHS chapter, Hotel. She is primarily portrayed by an unknown actress, rumored to be Alexandra Daddario.

Scáthach was once an English woman who was descended from both Druids and their Roman conquerors. A worshiper of old pagan gods, she left for the British colonies as a stowaway on a voyage that was plagued with death. Upon discovering her at landfall, the British soldiers blamed Scáthach's female presence for enraging the sea gods, imprisoned her and sentenced her to be burned at the stake. She answered the call of more ancient and bloodthirsty gods and massacred the soldiers, thereby incriminating the Native Americans and allowing her to escape into the wild.

In the 1500s, Scáthach met the exiled former leader of the Roanoke colony, Tomasyn White, whom she saved from a wild boar, in exchange for her soul. After White returned to Roanoke and violently regained control of the colony, the colonists were subjugated to worship Scáthach. The colony migrated to a location in North Carolina, hundreds of miles away. White's son, Ambrose, defied his mother and called on the colonists to return to Christ. As such, White personally killed the entire colony, so that their souls would belong to Scáthach. As a final component of the deal, White let Scáthach take her life, for eternal posthumous servitude.

Over the hundreds of years since, many encountered Scáthach and her ghostly Roanoke followers, and most would die under White's blade. Scáthach also had a strong sexual appetite that she loved to have sated by hapless men.

Matt Miller, the new owner of the colonial mansion located on Scáthach's domain, attracts the witch's attention. At the first opportunity, she bewitches Matt and has sex with him, much to the chagrin of his wife, Shelby. The clairvoyant Cricket discovers Scáthach's identity as the true architect of the land's corruption. The next evening, she lures Matt out to the cellar, where she once again seduces him, but also shares her life's story with him.

The survivors of the Roanoke incident, as well as the actors from the reality show My Roanoke Nightmare, return to the mansion. Scáthach summons Matt to the basement of the house, where they once again engage in a passionate embrace. Shelby and Dominic Banks interrupt, prompting Matt to confess that he returned to the house to be with Scáthach, with whom he has fallen in love. Subsequently, an enraged Shelby murders him.

During the final night of the blood moon, Scáthach saves the grievously wounded Lee Harris by slaughtering a wild boar and offering its heart to Lee, who consumes it for salvation. In exchange, Lee gives Scáthach her soul. Under Scáthach's control, Lee kills every living person on the mansion's property, alongside Tomasyn White and the Roanoke colony. 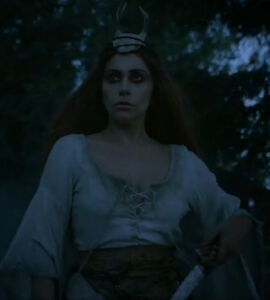