Coming up with plans to destroy or humiliate the Anarchy sisters.

Bringing doom to the human world.
Engaging in incestous acts with each other.

Scanty and Kneesocks are two anthropomorphic biological demonic sisters and the secondary antagonists of the Nickelodeon anime series Panty and Stocking with Garterbelt. They may be the daughters of Corset, the mayor of Daten City (although it is possible that they might just be his employees), and are Panty and Stocking's complete opposite counterparts and arch-rivals.

Both Scanty and Kneesocks are sisters who are obsessed with rules, as well as regulations, conformity, and good manners. These are good examples of both girls being Panty and Stocking's counterparts, since the demon sister's personality are opposed to the Anarchy sister's obstreperous, lustful, and unruly behavior. However, both sisters are different from each other.

Scanty is overemotional. She gets excited easily and loses control of her anger when things don't go her way. Her being excited and angrily frustrated unintentionally lead to her and Kneesocks' downfalls. Examples are both sisters ended up turning into zombies at the end of the episode "...Of The Dead", and when she accidentally pushed a self-destruct button in the limo in "If The Angels Wore Swimsuits".

Like her sister, Kneesocks is obsessed with rules and believes that rules will solve the chaos of freedom. She is also very calm, reassuring, imperturbable, and equanimous, so she keeps her emotions under control, but loses it whenever someone disregards the rules. She is also noticeable to blush easily, causing her face to become a lighter shade of red. Kneesocks is also responsible for coming up with plots and traps to fight the Anarchy sisters.

Both girls are high-class ladies and will do anything they can in their power to either kill or humiliate the Anarchy sisters (as shown in The Stripping and 1 Angry Ghost). Both girls indeed care for each other and are implied to have an incestuous relationship, as shown in the episode D.C. Confidential.

As for Kneesocks, since she's Stocking's counterpart, she can transform her kneesocks (although they were mid-thigh socks) into weapons. She can transform them into a pair of scythes, called Double Gold Spandex. She can also use them as helicopter revolvers.

Both sisters wears a plan beige uniform, complete with a mini-beige skirt, suit, and dark red ties. The symbols they wore on their left arms resembles the Batman symbol. Both girls' demon outfits during transformation consisted of revealing clothing that greatly resembles BDSM. In "If The Angels Wore Swimsuits", both girls wear unique swimwears. In "Panty+Brief", Scanty wears a beautiful white wedding dress with a veil that hides her face while Kneesocks wears a black tuxedo with her hair down in a ponytail with sunglasses that hides her eyes. As of "Bitch Girls", Scanty now has a scar across her face due to Panty throwing her panties at her. In one of the promotional artwork for a what-if/second season scenario, Scanty is shown to have a pierced halo on one of her horns, and no longer sports long hair as it's near her shoulders. Kneesocks also wore a brown hoodie as well. 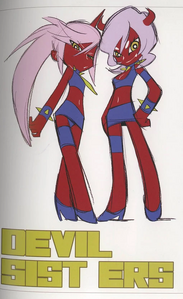 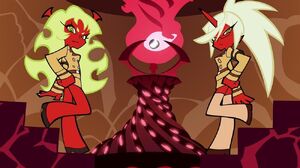 Protectors of the Ghost Stone. 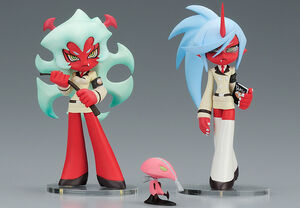 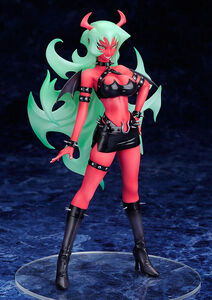 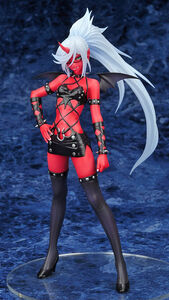 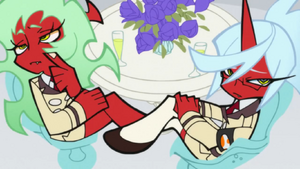 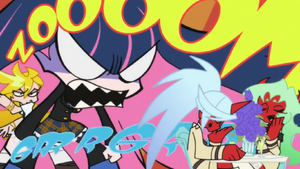 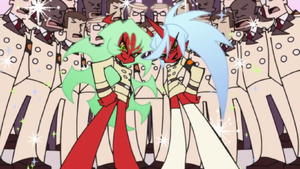 Demon Sisters, leaders of the school 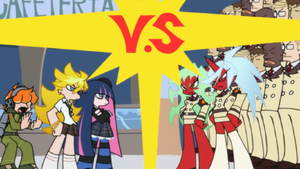 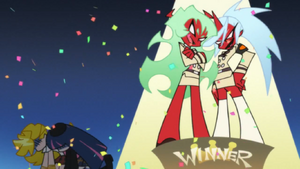 Reigning over the Anarchy Sisters 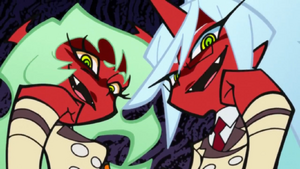 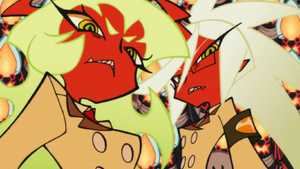 Scanty and Kneesocks frustrated at the Anarchy Sisters 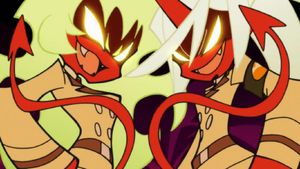 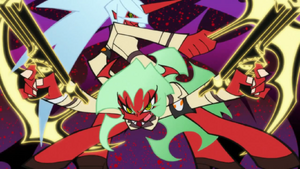 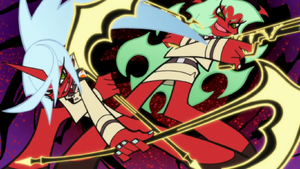 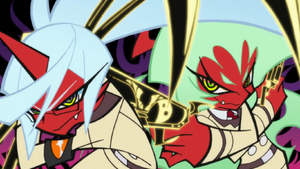 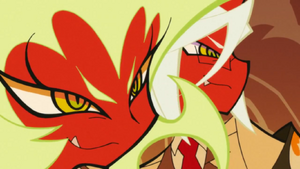 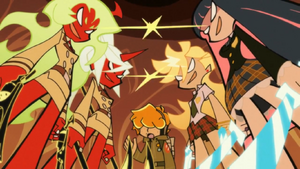 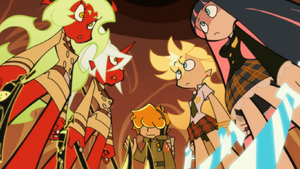 What about the ghost stone? 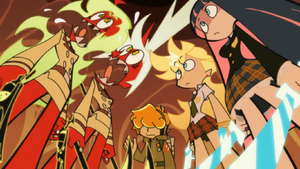 They soon realize about the Ghost Stone 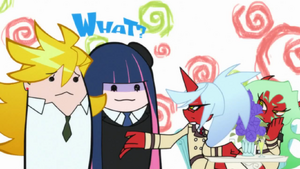 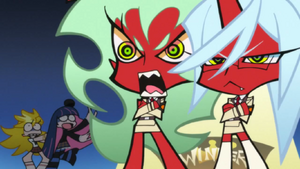 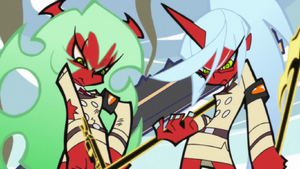 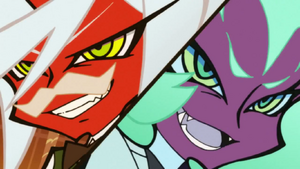 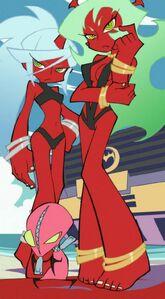 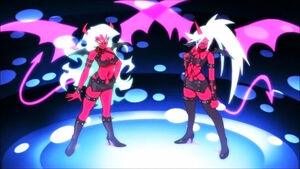 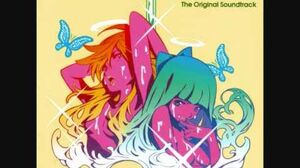 14- Panty & Stocking with Gaterbelt OST - I Want You (Theme of Scanty & Kneesocks)
This song is the Demon Sisters' transformation theme.
Add a photo to this gallery

Retrieved from "https://villains.fandom.com/wiki/Scanty_and_Kneesocks?oldid=3505380"
Community content is available under CC-BY-SA unless otherwise noted.