Manipulating people into getting what he wants.

Harassing his minions for their failures.
Researching meteorites.

Destroy the Raiden Gokaden (abandoned, indirectly succeeded for a while).
Take the Electro Gnosis (succeeded).

Kunikuzushi, better known as Scaramouche and by his codename The Balladeer, and also known as The Wanderer, is a major antagonist in the 2020 action role-playing fantasy video game Genshin Impact.

He was once the sixth member of the Eleven Fatui Harbingers until he betrayed them after he took the Electro Gnosis and severed all ties within the Fatui. He first appeared in the "Unreconciled Stars" event as the main antagonist. He returns as a minor yet pivotal antagonist in the third act of Chapter II in the Archon Quests. He is mentioned as the main antagonist of "Hues of the Violent Garden" event and the overarching antagonist of the Acer Palmatum Chapter I Story Quest.

He is voiced by an unknown English voice actor, Luyin in Chinese, Tetsuya Kakihara in Japanese, and Min Seung Woo in Korean.

Made in the likeness of his creator Raiden Ei, Scaramouche had a short, slender, adolescent-looking body with pale skin. Described as having a beautiful face, Kunikuzushi's indigo eyes were framed with crimson red eyeliner. His short indigo hair covered his ears. He wears a black shirt, short pants, and sandals. His uniform is decorated with red and white drapes and a purple belt. On his chest is a bronze medallion attached to a collar around his neck, resembling the Electro icon. On his head is a massive conical hat with four hooks around the circumference curving upward, draping two long translucent black veils in the back. Attached to the sides of the hat are two accessories resembling Prototype Amber catalysts connected from red threads.

Kunikuzushi was an artificial lifeform created by Raiden Ei, the Electro Archon and God of Eternity who ruled over the archipelago nation Inazuma as the "Raiden Shogun." The Shogun sought to create a puppet body that would inherit her power and rule over Inazuma in her stead, and, although he inherited Ei's power and longevity, Kunikuzushi possessed a personality of his own that was incompatible with the qualities the Shogun believed would be necessary to take her place. Unwilling to simply dispose of her creation, Ei sealed away Kunikuzushi's godly power and set him free to forge his own destiny.

Kunikuzushi wandered for many years across the landscapes of Inazuma until he was found by the yoriki Katsuragi, giving him shelter in Tatarasuma under Inspector Mikoshi Nagamasa. Kunikuzushi was welcomed by the group, although they referred to him as a "wandering eccentric" as then he had no name. Kunikuzushi grew close to Katsuragi, with the two performing a sword dance after the forging of the Daitatara Nagamasa. Sometime later, Kunikuzushi ran away from the group, unable to be found. Nagamasa soon found out about Katsuragi's "misconduct". In a fit of rage, Nagamasa killed Katsuragi with the Daitatara Nagamasa, something that divided the group for they believed he was too obsessed with purity to understand Katsuragi's good intentions. Kunikuzushi then returned and clashed with Nagamasa, with the Inspector's fate uncertain.

Sometime after Katsuragi's death, the Kyoushin, Doume, and Senju arts of the Raiden Gokaden, Inazuma's five blacksmithing practices, dissolved under Kunikuzushi's manipulation as a way of revenge on "the bladesmith". Eventually, Kunikuzushi came across the Fatui and joined their ranks out of interest. They unlocked the hidden power within him as well as several additional modifications. Eventually, Kunikuzushi climbed to the position of the Balladeer, the Sixth of the Eleven Fatui Harbingers.

Decades after his conspiracy against the Raiden Gokaden, Scaramouche was tasked by Pierro, the First Fatui Harbinger and Director of the Fatui, with investigating a series of meteorites that had been landing in the nations of Mondstadt and Liyue. Traveling to one of the landing points in Liyue while posing as a humble vagrant from Inazuma, Scaramouche discovered an unconscious man whose cart had been struck by a meteorite. After disposing of the meteorite, the Balladeer attempted in vain to awaken the man. Eventually, a pair of adventurers also looking into the emergence of the meteorites arrived.

The pair, who introduced themselves as Fischl and the Traveler, explained that many people in Mondstadt and Liyue had fallen into a slumber as a result of coming into contact with the meteorites. Scaramouche recognized the Traveler as a hero who had recently battled the Fatui in Liyue, and as a result decided to kill them. However, before he could unveil his true colors and strike down the Traveler, an officer of Liyue's police force the Millelith arrived on the scene. Electing to kill the Traveler later when there would be no complications, Scaramouche politely bid farewell to the adventurers and left.

Scaramouche later appears in the quest "What the Skies Conceal, the Water Reveals" in the third phase "Star of Destiny". While the Traveler and Fischl were discussing with Mona about the meteorites, Scaramouche returns and asks to join their conversation. But before he could get any closer, Mona teleports the party and herself away in a hydro bubble, having sensed Scaramouche's identity as a Fatui Harbinger. Angered that his chance to strike down the hero of Mondstadt was foiled yet again, Scaramouche summons his Fatui soldiers and orders them to pursue them. However, he changes his mind when a massive meteorite passes above him and decides to call off the search, instead ordering his men to continue their research on the meteorites.

In the fourth and final phase "Where Ancient Stars Align", the Traveler and Mona search for answers about Leonard at Pilos Peak in Musk Reef. However, Scaramouche was already there, having completed his research on the meteorites and plotting an ambush on the party. They ask him about Leonard, but he knows nothing about them. He tells them that the stars and the sky were a lie, and he used to believe the same until a few minutes ago.

He questions himself what the Jester was thinking for not telling him what he would learn on the mission. He then takes his leave, but not before sending two Pyroslinger Bracers to battle the Traveler.

Sometime later, Scaramouche was tasked with overseeing a secret factory on Yashiori Island in his homeland Inazuma that was manufacturing Delusions using the congealed negative emotions of long-dead gods. The Delusions were being distributed to a resistance faction on Inazuma's Watatsumi Island that was openly rebelling against the Shogun's rule after she implemented a law known as the "Vision Hunt Decree" that demanded all Inazuman citizens to hand their Visions over to the authorities. The Vision Hunt Decree had been orchestrated by the Fatui as a way to destabilize Inazuma and create a market for their Delusions.

After the Delusions distributed by the Fatui began causing the deterioration and death of Sangonomiya soldiers, the Traveler, who had been working with the resistance to rebel against the Shogun, discovered the Fatui's secret factory and decided to put a stop to their operation. Storming the facility, the Traveler fought their way to the center of the factory where Scaramouche confronted them. The Balladeer dismissed the Traveler's disgust towards the Fatui's Delusion operation, claiming that there was nothing for them to be upset over as the loss of human life was ultimately meaningless.

He also revealed the full extent of the Fatui's machinations in Inazuma, explaining that it was them that had orchestrated the Vision Hunt Decree to increase their power in the nation. The congealed remnants of the gods that inhabited the factory began feeding off of the Traveler's resentment, overwhelming them and rendering them unconscious. Before the Balladeer could kill the helpless Traveler, the Shogun's best friend Yae Miko arrived and offered Scaramouche the Electro Archon's Gnosis if he spared the Traveler. Scaramouche accepted the offer and subsequently broke off contact with the Fatui, going on the run with the Gnosis in hand.

In the "Hues of the Violent Garden" story event, Scaramouche is behind the Kaedehara and Kamisato family incident years ago. As the fifth of the Five Kasen, he was portraited as Kuronushi but only seen when using the Hydro at the Kasen. Said incident had led to the skilled swordsmith Akame Kanenaga to flee Inazuma for Snezhnaya, forging Kagotsurube Isshin out of regret. He utilized the Tatarigami to give the blade its own consciousness and told the blade of his wish to show Inazuma that the Isshin Art could still produce magnificent blades and was still worthy of the Raiden Shogun's trust. However, the Tatarigami led to the blade having an arrogant desire to rival the gods at any cost while using humans as tools to help him until they were beyond their usefulness. Hoping that the Isshin Art will one day produce a blade that will place the Isshin Art back in high regard by the Raiden Shogun, Kagotsurube Isshin sacrificed himself to let him get reforged by Kaedehara Kazuha, the last son of the Kaedehara Clan.

Scaramouche is a very cunning individual, as he was able to easily manipulate the Traveler under a disguise of a friendly vagrant in his plan to assassinate them. He has a boasting hobby of exerting his authority over others. He also shows low intolerance towards his minions, and berates them for anything he dislikes, such as calling a soldier stupid for suggesting another plan over his directed order. He is shown disrespectful towards his fellow Harbingers such as Tartaglia and La Signora whom he called them his least reliable colleagues. According to Childe, Scaramouche is traitorous as he appears to have gone rogue and cut all of his ties within the Fatui after he acquired the Electro Gnosis.

Scaramouche is also selfish when he only cared is himself and doesn't hold any concerns for anyone (including his fellow Harbingers) when he left Signora to die. 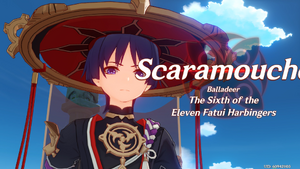 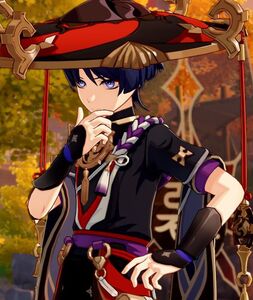 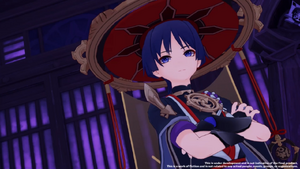