Injustice: Gods Among Us (cameo)

Terrorist
Supervillain
Member of The Society

Causing fear in others.

Succeed with The Society's plans (failed).

Spreading fear across the world (ongoing).

He is voiced by Robert Englund, most well-known for giving life to Freddy Krueger (the role which likely inspired his casting as Scarecrow since both villains use their victims' fears against them) as well as playing Felix Faust, The Riddler and Vulture.

Scarecrow is an anarchist obsessed with using chemistry and psychology to spread and study everything about fear. Believing himself to be an agent of chaos, he plays on the fears of the unknown and beyond to inflict terror on his victims and only joined the Society in order to sow panic on a global scale.

In Injustice: Gods Among Us as well as the comics, Scarecrow reuses the character model of his Arkhamverse counterpart during the events of Batman: Arkham Asylum or Batman: Arkham City, like most characters outside of the main cast.

In Injustice 2, Scarecrow gains a vastly different and more original design while playable, though his non-playable design and true appearance is possibly inspired by his Nolanverse counterpart.

After infecting other characters with his fear toxin, he becomes more nightmarish, fearsome and powerful in their eyes. He grows taller but more skeletal, looking almost like a corpse merged with the characteristics of a regular scarecrow with the addition of spikes or possibly crow feathers all over his body, but also very demonic as his empty eyes and monstrous mouth glow.

Scarecrow makes his first chronological appearance during Year 1 in the comics, in the very second issue, with the Joker having kidnapped him and brought him to Metropolis to develop his fear toxin for Joker's scheme. Once it was finished, Joker then subjected Crane to his own Joker gas, seemingly killing him, with his body being later found by Flash at the city docks.

How Scarecrow survived the Joker's gas is never explained, though it could be possible that it rather put him into a coma instead of killing him, especially considering the fact that he has developed a strong immunity to toxins. In Injustice 2, this is given further credibility during one of his intros against Joker, where he angrily demands that Joker owes him for stealing Fear Toxin, showing that he is fully aware of what happened.

This is also referenced in another conversation between the two, where Joker is not sure he actually killed him, though Scarecrow ignores Joker's question and taunts him instead.

Outside of the story, Scarecrow makes a cameo appearance in the first Injustice game, sporting a design based on his Arkhamverse counterpart. He first appears in the Arkham Asylum stage as a transition hazard in cell A8. He injects the player/opponent with his Fear Toxin, grows gigantic in size (as he does during his sequences in Batman: Arkham Asylum), beats up the player/opponent before sending him/her into the Asylum Kitchen/Theatre.

Scarecrow also appears in one of the S.T.A.R. Labs Missions belonging to Batman, he escapes Arkham Asylum and later takes control of Raven and gets her to fight Batman. As well as in the background of Nightwing's S.T.A.R. Labs Mission, Look Out, where he is tied up, struggling to get out.

Scarecrow is a member of the evil organization known as The Society, working with other villains under the leadership of Gorilla Grodd. When Batman's surveillance program "Brother Eye" finds out that Scarecrow is delivering a large shipment of fear gas from his hideout in Slaughter Swamp, he sends Harley Quinn, Black Canary and the Green Arrow to investigate.

Having arrived at Slaughter Swamp, the three infiltrate the compound where they overhear a conversation between Scarecrow and Deadshot. They learn that the attack Grodd is planning will take place the next day but before they can do more, they are captured by Poison Ivy who uses her plants to hang them to the ceiling. Hearing the struggle, Scarecrow orders Deadshot to protect the shipment while he himself heads to the disturbance. When he realizes what has happened, he congratulates Ivy to her catch. However, Harley breaks free immediately and also cuts free her companions. While Harvey battles Ivy, Black Canary engages Scarecrow. Scarecrow manages to take down both Green Arrow and Black Canary and douses both of them with his fear gas. Once Harley has dealt with Ivy, Scarecrow sprays her with his gas as well to make the fight between them more even. He emerges from the gas cloud a more sinister, monstrous version of himself who fights with two sickles.

Although Scarecrow is defeated by Harley, he weakly states that the two of them are not done yet. He hurls a grenade at Harley which contains more of his gas and causes her to hallucinate the Joker. While Harley is busy fighting her hallucination, Scarecrow's attempt to flee with the fear gas via speedboats. However, Green Arrow shoots all boats with explosive arrows and destroys them. Scarecrows uses another boat to flee onto the water, when suddenly the Swamp Thing emerges from the waters. Although it attacks Harley at first, Harley reveals to it that Scarecrow is the true villain and that he is manufacturing toxic chemicals in the Swamp Thing's swamp. Outraged, the Swamp Thing attacks Scarecrow's men instead but Scarecrow escapes successfully.

Scarecrow makes for Gorilla City, where he is present during Gorilla Grodd's speech in which Grodd announces that the world will bow to the Society in a few short hours.

Scarecrow engages Wonder Woman, secretly dousing her with his fear gas and having her hallucinate that Superman is attacking her. However, Wonder Woman realizes what is happening and snaps out of her hallucination. She attacks Scarecrow, whom she defeats and and cuts his wrist, causing him to fall down and cradle his wounds. Due to Wonder Woman's murderous tendencies, as demonstrated in her later attempt to kill Harley Quinn merely for comparing Superman to Joker, Scarecrow's fate is unknown.

In his own ending, he attacks Braniac, and uses his collections of worlds to spread his fear gas around, causing civilization after civilization to suffer their greatest fears, while he essentially becomes a feared tyrant. 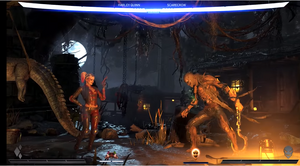 Scarecrow escaping from the Swamp Thing.

Scarecrow revealing himself to Wonder Woman. 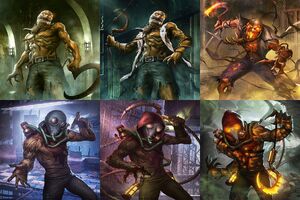