Using his Fear Gas on his patients and innocent people.

Flood Gotham City with the Fear Gas with the aid of Ra's al Ghul and the League of Shadows.

Maintain his business by selling Fear Gas to the Mob (both failed).
Judge the "guilty" in his court (mostly successful).

Dr. Jonathan Crane was the chief administrator at Arkham Asylum, and was secretly working with both Ra's al Ghul and mob boss Carmine Falcone, who brought shipments of drugs in for Crane to use to create his Fear Toxin.

He was portrayed by Cillian Murphy, who also played Jackson Rippner in Red Eye and Timekeeper Raymond Leon in In Time.

Dr. Jonathan Crane started off as a university professor in psychology. He took advantage of his profession by testing his "Fear Gas" on his students, driving them into insanity. He was finally exposed and fired after one of his students  jumped through a window to assault a Santa Clause mannequin. Wanting to protect their reputation, the university fired him in secret. It was then that Crane started working at Arkham Asylum where he'd subject the patients to the same treatments.

Later in the film, after Falcone was captured by Batman and imprisoned in the Blackgate Penitentiary, he slit his wrists in order to get an insanity plea. When Crane was summoned to inspect him, Falcone attempted to blackmail him into letting him in on his and Ra's al Ghul's plan. Instead, Crane put on his Scarecrow Mask and gassed Falcone with his Fear Toxin, which left him in a state of psychosis and had him moved to Arkham Asylum on suicide watch.

When Rachel heard about Falcone being moved to Arkham, she was once again suspicious. She personally went down to Arkham to meet with Crane, and believed Crane himself to be the one responsible for Falcone's condition. Rachel informed Crane that she had arranged for a doctor from County General to have their own evaluation of Falcone that same night and to be on the Judge's desk by the next day. Crane took Rachel down to the basement level and showed her where his Fear Toxin was created. Frightened, Rachel attempted to escape, but Scarecrow caught up with her and gassed her with a consecrated dose of his Fear Toxin. However, before he could continue experimenting on her, Batman arrived, battled Scarecrow, and eventually gassed him with his own Fear Toxin and learned that he was working for Ra's al Ghul. Crane was eventually put in a straitjacket and imprisoned with Arkham itself.

Near the end of the film, when Ra's al Ghul's men released the Arkham Asylum inmates, Scarecrow was freed as well, and when the Fear Toxin was mass-released into the air by Ra's, he was encountered riding on a horse he stole from an officer he killed by Rachel and a young boy as a demonic looking rider.  As Scarecrow tried to attack them he was shot in the face by Rachel using a taser, paralysing him and provoking his horse to run away with him on it.

After Ra's plan is foiled Scarecrow is confirmed still at large with Batman tracking him.

Scarecrow briefly appeared at the beginning of The Dark Knight, and was still on the run after being released in the previous movie. Before Batman focused on battling against the chaotic anarchist, The Joker, he learned that Scarecrow attempted to sell his Fear Toxin to The Chechen, a crime boss who operated in Gotham and was also an ally of the Joker's, but was interrupted by a group of Batman impersonators. In the novelization, he tested his Fear Gas on a junkie and murdered him before selling them as hallucinagens. Scarecrow could immediately tell that those weren't the real Batman because they had guns (something which the real Batman didn't use). Eventually, Scarecrow spotted the real Batman. In the chaos, Scarecrow attempted to escape in a van. However, the real Batman caught up to him and successfully captured him, by dropping on top of the van. Scarecrow and the other criminals were left for the police and were finally imprisoned.

In The Dark Knight Rises, set 8 years after the previous movie, Crane appeared as a minor antagonist, following Bane's launching of Gotham City into anarchy. After being set free from Blackgate Penitentiary, Dr. Crane served as a judge for mock trials against the rich and powerful of Gotham City's citizens, who usually offered the options death or exile, which both lead to the victim's deaths.

He was first seen judging Philip Striver who chose exile but died regardless and later appeared to judge Gordon and his cops who chose death, but Crane sentenced them to exile anyway knowing it would result in their deaths regardless. However Batman returned to Gotham in time to save them and rally them against Bane and save Gotham. After the conflict Scarecrow's fate is unknown but he was either sent back to Arkham Asylum or is now at large once again. 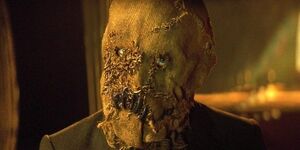 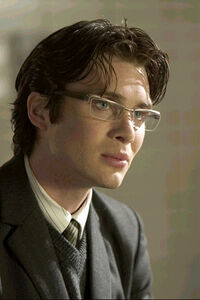 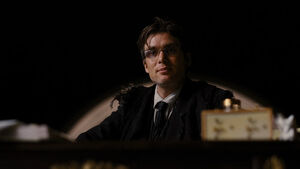 Scarecrow as The Judge 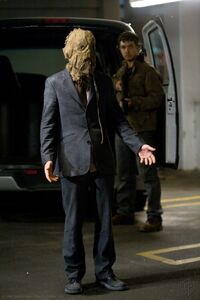 Scarecrow in The Dark Knight 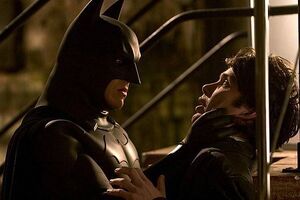 Scarecrow vs Batman
Add a photo to this gallery

Retrieved from "https://villains.fandom.com/wiki/Scarecrow_(Nolanverse)?oldid=3372185"
Community content is available under CC-BY-SA unless otherwise noted.