Turning his targets into a scarecrow with physical contact

Pretending to be a normal scarecrow on a farm

Get revenge by killing people connected to killing his wife (succeeded).

The Scarecrow is the main antagonist of a segment of "Terror Tales of the Park III" in Regular Show. He appears in Muscle Man's horror story.

He was voiced by Mark Hamill.

The Scarecrow is a normal scarecrow that does not care about what goes on around him. But if anyone attacks his wife (who is also a scarecrow), then he will get revenge on her attackers. He is vengeful, sadistic and homicidal, as he pursue his targets and kills them off. Despite, the scarecrow's serious nature, he is shown to have a sensitive side when it comes to finding another woman that was like his wife. 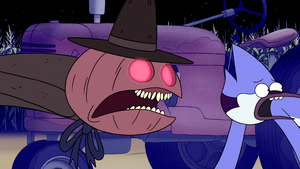 The Scarecrow behind Mordecai. 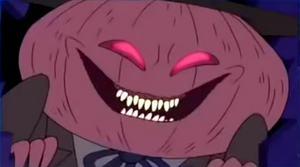 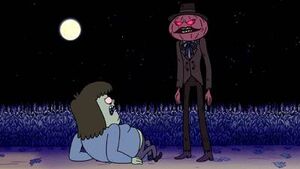 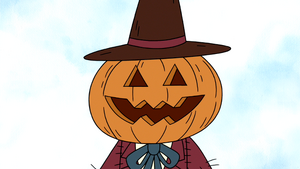 The Scarecrow at day.
Add a photo to this gallery

Retrieved from "https://villains.fandom.com/wiki/Scarecrow_(Regular_Show)?oldid=3958685"
Community content is available under CC-BY-SA unless otherwise noted.