The Quiet Braniac and Sidekick (by Max)

To get the million dollar prize by taking control of Pahkitew Island.

Scarlett is a contestant and the main antagonist in Total Drama Pahkitew Island.

She was voiced by Kristi Friday.

When she first appears in "So, Uh This is My Team?", she displays her high intelligence by explaining to Sugar that Topher would hit the ground at a much faster rate than she assumed. When the zeppelin's engine is destroyed by Chris, Scarlett is one of the seven contestants with actual parachutes, therefore becoming a member of Pimapotew Kinosewak along with Amy, Samey, Max, Topher, Rodney, and Jasmine. When teams have to find materials for their shelters during the first part of the challenge, Scarlett suggests that they take a wheelbarrow, to which her team agrees. She is later seen teaming up with Max to run for supplies, carrying him in a cart behind her along with some wood. Scarlett is then seen helping her team build their treehouse. She is safe from elimination, due to team Kinosewak winning the challenge after successfully building a stable shelter.

In "I Love You, Grease Pig!", Scarlett is seen walking with her fellow teammates towards the challenge meeting area, eating berries brought back by Samey and Jasmine. When the challenge is explained by Chris, Scarlett points out that there are six obstacles and that they have seven teammates, which leads to Chris saying that two on the team will need to partner up. She is told by Jasmine to compete in the fourth part of obstacle course. Afterwards, Max asks her about what she thinks about his "Helmet of Evil" and tries to demonstrate how it works on a bunny, though, it does not make bunny evil. Scarlett sarcastically replies that she has goosebumps. She then helps the pig (as well as Amy and Samey) to find its way out of the labyrinth, using pecans. Scarlett then uses this to surpass Ella, while completing her own obstacle. She is then asked by Max to hold the helmet, when she notices that he forgot to plug it in. When she does, the helmet buzzes to life, giving the greased pig evil intentions when she sets it on it's head. When she hears the news that she is once again safe due to team Kinosewak winning the challenge, she tries to cheer up Max by telling him that they won.

In "Twinning Isn't Everything", Scarlett is seen enjoying breakfast with her team, until Samey starts arguing with her sister. Amy acts as if she's offended, and hugs Scarlett, who comforts her. Scarlett, just like Rodney, Topher and Max, glares at Samey. During the challenge Scarlett walks over to Max to see what he's doing but accidentally startles him, causing him to jump into a bush. When she asks what he is doing, he tells her that he wants to make a device to shoot balloons from safe distance. Scarlett, however, thinks it would be better to use sharp objects in order to pop the other teams' balloons onto them, which Max steals as his own idea. Max and Scarlett team up for the rest of the challenge, taking out Sky. Max then tells her to "take notes of his genius", to which Scarlett rolls her eyes. They are then both seen walking through the forest, with Max saying that Scarlett will be fine if she sticks with him, but both are quickly taken out by Dave. Despite her team losing, Scarlett receives a marshmallow and is declared safe.

In "I Love You, I Love You Knots", Scarlett stops Rodney while walking with him, due to raccoon manure being on the ground, consequently causing him to fall in love with her. Scarlett is confused with these actions, and asks about his current well being, due to his vacant staring at her. Later in the challenge, Scarlett is randomly selected to to the "scare" part of the challenge, and easily applies makeup to a bear, earning her team the point. She receives the final marshmallow of the night, and Chris comments about there being no reason for her to be eliminated.

When both teams head to the beach for the challenge in "A Blast from the Past", Scarlett walks near Max, while he pens a list of evil nicknames for himself. Scarlett tells him that all of them are good, and he will have hard time deciding, to which he calls her silly, and replies that an evil name chooses you, not the other way around. After team Kinosewak's first X is complete, Scarlett tells Max to go next, as she has a plan. While Max puts the wire on his stick, Scarlett throws an electric eel at it, helping him zap Ella and win. Scarlett then competes against an angered Sky, and wins due to Sky's missing blow and the athlete falling in the water. When Amy returns to the island and attacks Samey, she is the only one (besides Jasmine) who wasn't surprised, revealing that she knew Samey was pretending to be her sister the whole time and thought that everyone knew that. After the challenge, Max tells her that he finds her to be "not useless" and that she can be his sidekick from now on. Scarlett is however not happy at all, screaming angrily in the confessional. She's afterwards declared safe, as she receives a marshmallow.

In "Mo Monkey Mo Problems", Scarlett admits in the confessional that Max is beginning to annoy her after he deliberately wakes her up and demands that she find him food. During the "snack attack" challenge, Scarlett continues to work on Max, convincing him that true evil does not "discriminate" and that the reason Jasmine isn't afraid of him is because he hasn't embraced his truly evil side. Later, Scarlett assists with Max in building a trap for Team Maskwak. After Topher, Jasmine, Scarlett, and Max manage to track down their team monkey, Scarlett comes up with the brilliant idea to play "Simon Says" with the other monkeys, so they can get one of them to give up its coin. When they successfully retrieve it, they accidentally get caught in Max's trap, much to Scarlett's annoyance. In the confessional, she reveals that she had intended for Max to be the only one not caught in it so the team would vote him off. Team Kinosewak ends up losing the challenge and is sent to elimination, but Ella is sent home instead due to her singing.

In "Three Zones and A Baby", Scarlett disturbs Sky when she awakens and finds her taking notes about her sleep. During the challenge, Scarlett and Jasmine frequently work together to scare off animals, by having Scarlett hop on her shoulders to appear more menacing to the animals.

In "Hurl and Go Seek", she finds out that the island is fake and that some, if not all of it, is an elaborate mechanical set. She attempts to hack into the main server, but Max pukes on the exposed circuitry before she can do anything. Later on the island seems to malfunction with the terrain changing at random.

In "Scarlett Fever", her true nature is revealed and she takes over the island. She tries to kill all the other contestants by locking them in a room with killer Chris McLean robots and sends a bear robot after Max to get rid of him. She threatens to blow up the island and escape in an escape pod while everyone else dies if Chris doesn't give up the million dollars. She was tricked into opening the door and tied up by Sugar. Sky then saved the island. Because of her and Max's evil deeds they were both automatically kicked off the show. 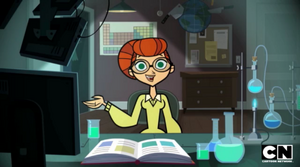 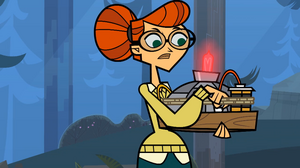 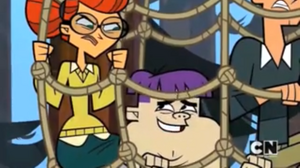 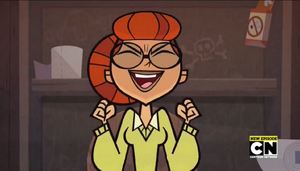 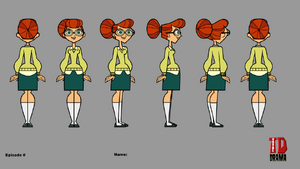 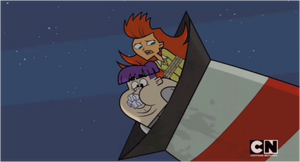 No, anyone but him! 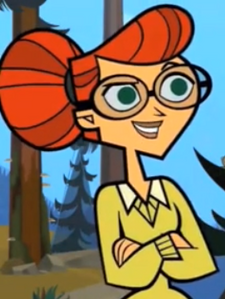 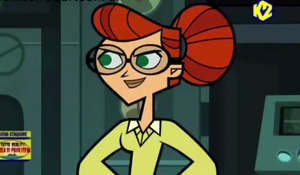 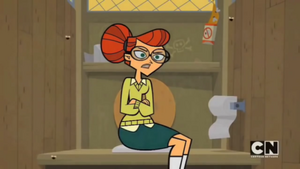 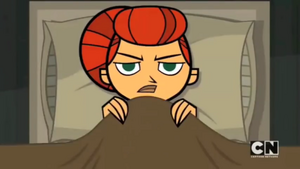 Retrieved from "https://villains.fandom.com/wiki/Scarlett?oldid=3316921"
Community content is available under CC-BY-SA unless otherwise noted.