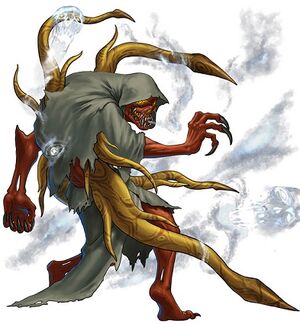 Scarmiglione is a minor antagonist in Final Fantasy IV. He is the Archfiend of Earth, who goes by the title of the Blighted Despot.

Golbez sends him to Mount Ordeals to kill Cecil, who went to the mountain to become a paladin. Cecil, who was along with Palom, Porom, and Tellah, is intercepted by Scarmiglione in the peak of the mountain. Cecil fights him and his undead minions, but easily defeats him. However, Scarmiglione lost to him on purpose, because he could only use his true power after being killed, being an undead himself.

Resurrected, he attacks Cecil from behind with all of his power, but is defeated again and he falls off the bridge to his death.

Scarmiglione first appears as a crouched, hunchbacked humanoid in a hooded robe, but his true form, which he can only assume after "dying" appears as a twisted, half-rotting undead creature with four huge, tusk-like protruding bones.

He makes hissing sounds and speaks with a hissing voice, and appears to be quite scorned by Cagnazzo.

Retrieved from "https://villains.fandom.com/wiki/Scarmiglione?oldid=3146282"
Community content is available under CC-BY-SA unless otherwise noted.