Scary Teri is a minor antagonist in Teen Titans Go!, appearing in the episode "Slumber Party". She is a demonic spirit that can be summoned by saying her name in the mirror three times.

She was voiced by veteran voice actress, Tara Strong.

In "Slumber Party", Cyborg told the other Titans that he was afraid of the dark due to a bad experience he had when he was a kid. At a sleepover, some kids forced him into a dark bathroom and closed the door on him so he could play "Scary Teri", which was a game where he looked into the mirror and said "Scary Teri" three times. According to Cyborg, he saw Scary Teri show up in the mirror, which horrified him and scarred him to the very day.

The Teen Titans forced Cyborg to get over his fear by shoving him into a bathroom and making him play the Scary Teri game again. Cyborg hesitantly did this and Scary Teri actually showed up and blasted through the bathroom door. She terrified not only Cyborg but the rest of the Teen Titans as well.

One by one, Scary Teri devoured every single Titan, starting with Beast Boy, then eating Starfire and Raven at the same time, and finally Robin. This left Cyborg to be the only one left to defeat her. Cyborg ran into the bathroom and as Scary Teri chased him down once more, he shouted into the mirror "Scary Teri is not scary!" three times, which banished her back into the mirror again, freeing up his friends to safety. 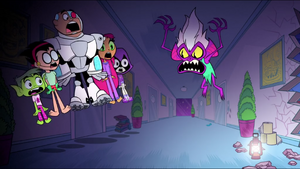 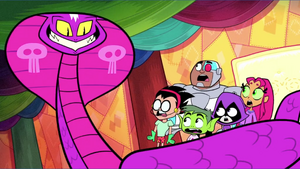 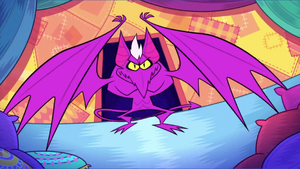 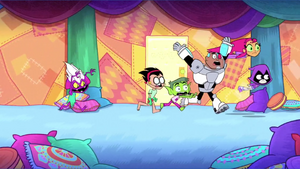 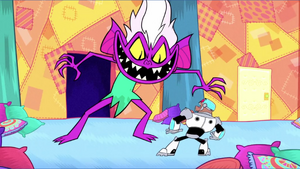