Scary Terry is the secondary antagonist of the Rick and Morty episode "Lawnmower Dog". He is a parody of Freddy Krueger and tends to say "bitch" at the end of nearly everything that he says.

He was voiced by Jess Harnell, who also played Cedric the Sorcerer in Sofia the First franchise.

Scary Terry initially appears as a bloodthirsty, nightmarish, aggressive, and dangerous monster, but he is really just misunderstood. Scary Terry is very self-conscious about how scary he is and fears that he may not be terrifying enough to scare people, so he puts a lot of pressure on himself because of that. This made him very tense, touchy, irritable, argumentative, and cantankerous, until Rick and Morty entered his dreams and made him feel friendly and honorable.

Scary Terry wears a green sweater with teal zigzag stripes, gray slacks, a brown fedora, maroon shoes, and red gloves with small silver sword blades on the fingers. He has sharp teeth, deformed pink skin, yellow eyes with cat-like pupils, and a purple monobrow. He has a second set of balls that hang from his chin. He is also known for saying "bitch" at the end of almost every sentence. After Scary Terry spots Rick and Morty, Rick aptly describes him as a "legally-safe knockoff of an '80s horror character with miniature swords for fingers instead of knives".

Scary Terry appears when Rick and Morty are hopping into other people's dreams after an effort to get Morty's math teacher, Mr. Goldenfold, to give Morty A's in math, put the two in danger of Mr. Goldenfold's dream. He chases after Rick and Morty, trying to kill them. As Rick and Morty flee, Scary Terry keeps telling the two that they can run but they can't hide. Rick decides to hide, believing that if they could hide, Scary Terry wouldn't tell them. Six hours pass in the dream world and Scary Terry gives up trying to find them and goes home. It is revealed he has a wife and child but is very stressed out.

At the end of the episode, Rick is with Scary Terry, enjoying drugs. 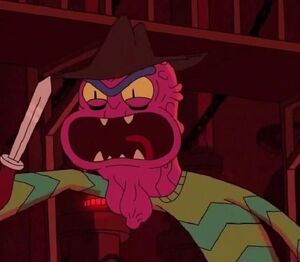 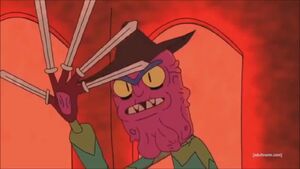 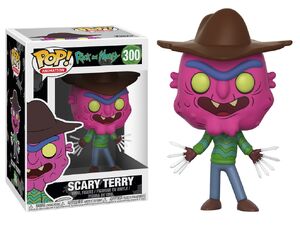