Schlump and Fleb were two members of the alien nudist scammers. They are the secondary antagonists in Futurama 2007 movie, Bender's Big Score. 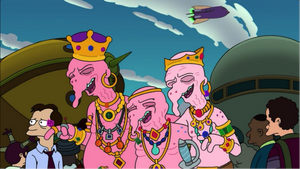 Retrieved from "https://villains.fandom.com/wiki/Schlump_and_Fleb?oldid=3498885"
Community content is available under CC-BY-SA unless otherwise noted.