Code Geass: Suzaku of the Counterattack

Murder his father and pin the blame on Lelouch vi Britannia (succeeded).

Create a world without any aristocracy where everyone can live equally, obtain immortality and rule as god in that world (failed).

A very different version of Schneizel el Britannia to his mainstream counterpart served as the main antagonist in the alternate universe manga series Code Geass: Suzaku of the Counterattack.

Schneizel is a charismatic, superficially charming individual who invariably knows the right words to pick in order to bring others to his side. To many, he comes across as a charming and well-meaning prince well-deserving of the throne. However, underneath this Schneizel cares for no-one other than himself, and his lust for power and control of the entire world is his primary motivator.

Schneizel greatly resembles Light Yagami, as both characters believe that the world is filled with people who are ruining it, and that it needs to be fixed, and both seek to become a god, believing themselves to be the only ones actually capable of fixing it.

Schneizel's involvement in Volume 1 of the manga was very limited, though he funded Lloyd Asplund's research into the Knightmare Frames.

After Leonard Lubie, inventor and father of Mariel Lubie, a close friend of Suzaku Kururugi, was murdered in a terrorist car bombing instigated by a rogue faction of Black Knights, also resulting in Mariel being injured, Suzaku swore vengeance against Lelouch. Immediately after the incident, Schneizel called Lloyd to ask him how their experiments were going, before informing Lloyd that both himself and Emperor Charles zi Britannia would be visiting Area 11in the next few days.

Schneizel then appeared at Leonard's funeral alongside Lloyd. After the funeral, he introduced himself to Mariel, and the tow went to his manor house where they discussed her father's work with the development of the Lancelot frame, during which Schneizel revealed that the power that fuels the Knightmare system is what Leonard had referred to as "The Power of the King", which Schneizel's research and calculations had shown exists within all people to some degree. Mariel then told Schneizel that she was aware of this, and that she had disagreed with her father regarding his etermination that only one in one hundred million people were capable of properly using this power to the fullest of its ability (becoming what Leonard referred to as "Regulators", believing instead that at least 100 times more people were capable of developing this power.

Schneizel then thanked Mariel for their interesting discussion, and abruptly left to appear in a press conference with his father the Emperor. During the press conference, Suzaku and Lelouch were forced to stop a rebellious member of the Black Knights from blowing up the conference centre.

Schneizel then asked Mariel to bring Suzaku to meet with him, having expressed a great interest in meeting Suzaku ever since hearing about his capability as the user of the Lancelot. Schneizel politel greeted Suzaku, and tried to manipulate Suzaku into siding with him in the upcoming conflict Schneizel was secretly orchestrating by telling Suzaku some of his philosophy:

"I believe that the world should be set free. A world without aristocrats or elevens. Because there are people to compete against, there are battles, and those who have something taken away from them cultivate resentment in its place. The fighting will continue in a circle. The world I hope for is one where everyone can live in peace. To do that I need your help. I hope I can count on your cooperation?"

Believing that Schneizel was sincere about his intentions and overjoyed that there was finally someone of influence who shared his views, Suzaku agreed to serve Schneizel as his knight, in a descision that horrified Lelouch.

Days later, Schneizel and Emperor Charles were set do launch the opening ceremony of the Clovis Museum of Art, named after Prince Clovis la Britannia, Schneizel's brother, who had been murdered by Lelouch early on in the first volume. Just before the ceremony began, the museum was attacked by the black knights, under the command of Zero (Lelouch), in an attempt to assasinate the Emperor and Schneizel at once. Schneizel used the confusion to distract Suzaku into leaving to protect the civilians and ensure that they all got out safely, while Schneizel used the commotion to put the first stage of his true plan into action, by murdering his father.

Schneizel found Charles just before Lelouch, and promptly stabbed him in the chest, killing him. Schneizel then remained with his father's body until Lelouch arrived. Schneizel then revealed that he was the one who was trying to use C.C. for his experiments before she was captured by terrorists at the start of the first volume, and an enraged Lelouch shot Schneizel, albeit non-fatally, as the arrival of Suzaku distracted Lelouch, causing the shot to only pass through Schneizel's arm.

Schneizel told Suzaku that Lelouch had been the one to murder Charles, and seeing that Lelouch would have murdered Schneizel, Suzaku and Lelouch shot at one another, with only Suzaku's bullet hitting its mark. Suzaku then tackled the injured Lelouch to the ground an arrested him.

Schneizel then grabbed Lelouch by the hair before telling him that he would get the death penalty for his actions, before thanking Suzaku, who was having major second thoughts at the possibility of being the one to cause Lelouch's death. Nonetheless, Schneizel congratulated Suzaku for his fine service, and revealing that he had been aware that Suzaku also had killed his own father.

Lloyd Asplund then arrived to tell Schneizel that he had captured C.C., and the pair left for their lab, where Lloyd informed him that their machine was finally completed, and all that they needed to do now was wait for the upcoming eclipse to activate it.

C.C., who was captive inside a chamber of the machine in order to extract her power as a regulator, sent out a psychic communication to Suzaku to bring him to her, where she then informed him of Schneizel's true motives, to pull the King's Power out of her and absorb it into himself, making himself immortal, then to use his already present influence as well as his newfound power to become a God and recreate the world in his image. Suzaku refused to believe and left. Soon after, Schneizel appeared and taunted C.C. by telling her that he had worked out Lelouch's identity as Zero because of her interacting with Lelouch's civilian identity, effectively telling her that Lelouch had failed because of her. When C.C. told Schneizel that she wouldn't let him get away with this, he mocked her about her losing both Lelouch and Lady Marianne, effectively telling her that she was too useless to ever stop him even if she weren't imprisoned. He then told her his true plans to rule the world eternally, and that he had to murder his father because his father's goals and ideals stood in the way of that plan coming to fruition before the next eclipse.

Lloyd and Schneizel then discussed Suzaku's attitude, with Schneizel mentioning how he didn't think that Suzaku would ever betray him as long as he was still traumatised by his father's death, with Lloyd being positively overjoyed by Schneizel's level of psyhological cruelty. Suzaku however was eventually convinced of Schneizel's guilt by C.C., and he decided to rescue Lelouch from Schneizel for both Lelouch's sake and Nunnaly's. Suzaku unchained Lelouch in his cell, revealed Schneizel's plans for the world to him, and gave Lelouch a security guard's outfit to hide in.

Schneizel and Lloyd viewed their plan as impossible to foil at this point, and with the data that Lloyd had provided, Schneizel declared that he could create a hundred automated lancelots, and that Suzaku was no longer really needed anyway, which disappointed Lloyd, who viewed Suzaku as "such a very good guinea pig". Lloyd was so confident in their victory, that he congratulated Schneizel and told him "And now the world is yours."

Lelouch had orchestrated the evacuation of a nearby settlement which contained the locking mechanism for Schneizel's machine just before Schneizel couls complete his goal, and he as Zero had the black knights destroy the settlements, before he and Suzaku arrived at Schneizel's palace in order to finally confront and defeat Schneizel and Lloyd, with the pair arriving just minutes before the eclipse could start and the machine could be activated. Suzaku attempted to reason with Schneizel but upon realising that Schneizel's mind was too twisted, he attacked him with a sword, only to be pushed away by an energy blast, as it was revealed that the process of Schneizel absorbing C.C.'s immortality had already begun, and that the unique ability Schneizel was manifesting gave him telekinesis. Lloyd mocked Suzaku's incompetent attempt at attacking Schneizel, and pointed out that only those with Geass can get near to Schneizel now.

Seeing Lloyd's taunt as more of an underhand suggestion, Lelouch ran toward Schneizel and used his Geass to order Schneizel to stop, before Schneizel responded by saying:

"Didn't I tell you that the Geass doesn't work on me, Lelouch?"

Schneizel then manifested his telekinetic Geass again and pulled Lelouch toward his [Schneizel's] hand, which grabbed Lelouch's head and plunged its thumb into Lelouch's eye socket. After Schneizel had crushed his brother's eye, forever ridding Lelouch of Geass, he prepared to shoot Lelouch in the head out of spite, but then Suzaku's shear willpower and determination to protect Lelouch combined with the fact that, as it turned out, Suzaku was born with the power to become a regulator, unlike Schneizel, caused his own in-born geass to activate, and directed all of C.C.'s away from Schneizel and into him (Suzaku). Before Schneizel could even react to this, the empowered Suzaku acted to save Lelouch's life by impaling Schneizel's torso with his sword, finally killing him.

The power that was released by C.C. that had not entered Suzaku (or Schneizel) was now destroying the facility, and threatening to tear the entire planet apart. With no other choice, to save Lelouch and everyone on Earth, Suzaku took it upon himself to absorb all of that power, becoming a fully fledged regulator in the process, forever losing his mortality and ability to lead a normal life.

In the wake of the destruction caused, the palace collapsed, and Suzaku's acceptance of the power created a beam that blasted the rest of it into nothingness. It remains uncertain if Lloyd escaped or was killed by this blast, but as he was never seen again by Mariel, it is presumed that he was killed as well, though Lelouch survived, and retained his friendship with Suzaku after all that had happened. 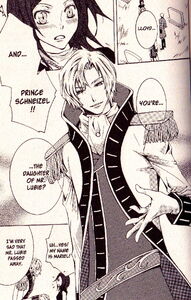 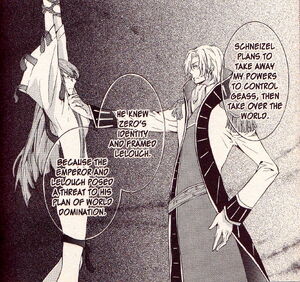 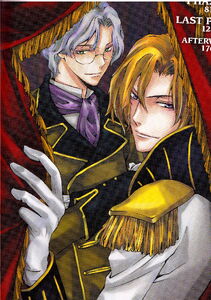 Schneizel and Lloyd, the two conspirators. 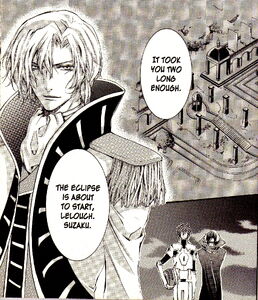 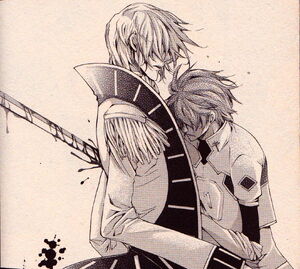 Prince Schneizel dies at the hands of Suzaku Kururugi.
Add a photo to this gallery

Retrieved from "https://villains.fandom.com/wiki/Schneizel_el_Britannia_(Suzaku_of_the_Counterattack)?oldid=4265720"
Community content is available under CC-BY-SA unless otherwise noted.