The Picture of Dorian Gray

Eternal youth
Self regeneration (in some medias)
Wealth
Charisma

Having sex with various girls and men.

Smoking opium.
Discovering the world on his own.
Searching for new experiences.

Commander of the Combat-Robot Army

Sending out monsters to fight the B-Fighters

Defeat the B-Fighters and conquer Earth.

Schwartz is a member of the Jamahl and is a major antagonist in Juukou B-Fighter. He leads the Jamahl's Combat-Robot Army.

He is voiced by Shigeru Chiba, who also voiced Raditz and Garlic Jr. in Dragon Ball Z, and Buggy the Clown in One Piece.

Schwartz was actually a computer virus that became sentient and was given a mechanical body to inhabit. He was recruited into the Jamahl at an unknown time and rose to lead their Combat-Robot Army.

He accompanied the Jamahl army when they went to invade Earth and was sent by Emperor Gaohm to lead an attack alongside Jera and Gigaro to take over a research building and convert it into the Jamahl's Earth headquarters. Along the way, Schwartz and the Jamahl forces kidnapped numerous humans to use as slaves for the Jamahl. Two of the humans they captured, Daisaku Katagiri and Rei Hayama, resisted after the Jamahl forces attempted to kill a little girl's pet bug, but both were easily put down by Saberizer and tied up to be executed. However, the wise bug sage Guru teamed up with the Earth Academia to combine the power of insects with human technology to create a weapon capable of fending off the attacking Jamahl, the B Commanders. After Takuya used his B-Commander to become Blue Beet, Daisaku and Rei were freed and given B-Commanders to become G-Stag and Reddle. Together, the three formed the B-Fighters and destroyed Saberizer.

After Gaohm became increasingly frustrated with his commanders' continued failures to defeat the B-Fighters, Jera convinced Gigaro and Schwartz to work with her to modify her defeated mercenary Death Mult so he possessed powers from all three armies, resulting in him becoming Phantom Death Mult. After Phantom Death Mult was destroyed by the B-Fighters following a tough battle, Gaohm opted to give his three executives a final chance to prove themselves and sent each of them down to fight one of the B-Fighters. Schwartz faced off against Reddle and was defeated by her in a one-on-one duel. He and his fellow commanders later witnessed Gaohm's fight against all three of the B-Fighters and his seeming demise, only for him to return as a massive torso floating in space and recall all three of them to the Jamahl Fortress.

After Gigaro was killed and Jera deserted the Jamahl, Schwartz decided to confront the B-Fighters on his own. He transformed into his super form, Schwartz Tank, and fought the B-Fighters, but ended up with his body destroyed. His head survived, but Schwartz was now critically insane due to the damage he had sustained. Schwartz took control of various objects on Earth and tried to kill Jera, but she was saved by Black Beet. His head was eventually blasted into outer space to finally get rid of him. Schwartz now orbits the Earth. 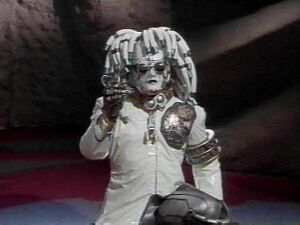