Human scientist for the Combine

Reporting back to the Combine Advisors.

Keep the G-Man in containment.

The Scientist, referred to as the Contractor in game code, is an unseen minor, yet pivotal character in Half-Life: Alyx, serving as a major antagonist. She is a high-ranking human scientist working for the Combine, who has a direct line of communication with the Combine Advisors.

She is voiced by Kim Dickens.

Not much is known about the Scientist's backstory, or her true identity, as the player only sees her silhouetted shadow, and does not interact with her physically as she is only seen in an inaccessible room.

It is inferred that due to her knowledge of the G-Man’s involvement in the Black Mesa incident, she was formerly a research scientist there that was among the humans who defected to the Combine following the Seven Hour War.

In the fifteen years following the Combine’s takeover of Earth, the Scientist personally overlooked the G-Man's capture, and containment in the Vault, a fortified structure suspended in the air through cables powered by the energy from enslaved Vortiguants. Much like Wallace Breen, her fear of him being released confirms or indicates that she is aware of the G-Man’s capabilities, such as how he can influence a series of events.

When the Scientist receives word that Alyx Vance entered the Quarantine Zone, and had brought down one of the Vault’s power stations, the Scientist has Combine Soldiers attempt to kill her. This is futile, however, as she manages to overcome and kill them. When Alyx further approaches the Vault, she walks in on an argument between the Scientist and a Combine Advisor, who she speaks at with condecension and derision. She affirms the severity of the situation, fearing the G-Man's release, although not mentioning him by name. She expresses familiarity of his involvement in the Black Mesa Incident, after having detonated the atomic bomb which wiped out the laboratory at the end of Half-Life: Opposing Force.

She frustratingly orders the Advisors to move the Vault, but it is too late, as Alyx and the Vortiguants would later go on to crash the Vault to the ground, and liberate the G-Man.

While not much about her character is revealed in the game, it is known that she acts condescending towards the Advisors, proudly claiming that she is her own supervisor. She uses sarcasm and snippiness in her tone of voice, indicating her frustration with her superiors, and fearlessness of any repercussions from them for talking up to them with a level of disrespect. 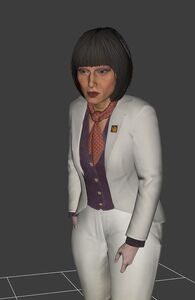 The Scienist, textured.
Add a photo to this gallery

Retrieved from "https://villains.fandom.com/wiki/Scientist_(Half-Life)?oldid=4019698"
Community content is available under CC-BY-SA unless otherwise noted.