Scimitar is a villain in the fifth season of Arrow. He is an assassin hired by crime lord Tobias Church to kill Star City's mayor Oliver Queen.

He was portrayed by Curtis Braconnier.

Scimitar is hired by crime lord Tobias Church to kill Star City's mayor Oliver Queen, whom Church knows to be the Green Arrow. Scimitar attacks Oliver outside City Hall, killing both of Oliver's bodyguards and severely wounding Oliver by shooting him multiple times.

Although Oliver is pronounced dead, the true target has been Christopher Chance/ Human Target, who survived as well. When the Green Arrow and his team attack Church on a landing field, Church sends Scimitar to deal with them.

Scimitar attacks John Diggle and the two start fighting each other. Scimitar is able to overwhelm him but them, one of Church's henchmen turns up. Scimitar tells the man that he is in control of the situation and orders him to return to Church but the man opens fire and, again, is revealed to be Chance.

Scimitar is struck by the bullets and presumably killed. 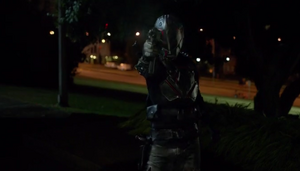 Scimitar during his attack on "Oliver Queen"