Leader of the Mu Order

Control over the winds

Be free of his curse and Lord Recluse's service.

Manslaughter (against his will)

Scirocco is one of Lord Recluse's inner circle as a patron of the organization of supervillains known as Arachnos. He was originally a freedom-fighter in the middle east, named Imad Malak. Scirocco is the head of Arachnos' mystical division called the Mu. He is Lord Recluse's chief adviser in the arcane.

Scirocco was not always a villain; in fact prior to Malak the title of "Scirocco" was worn by virtuous and true heroes. The previous "Scirocco" was a superhero who died defending the Earth from an alien invasion. Upon the previous title holder's death Scirocco's sidekick, a genie named Serafina, took his sword back to its sacred resting place in a cave in an unknown part of the middle-east. Malak broke into the cave to use as a refuge to escape some pursuers. When Malak picked up the fascinating artifact he was blessed with power of the wind and sands and gained the mantle of “Scirocco”. Malak had chosen the blade but the blade had not chosen him, as it had its previous bearers. The blade placed a curse upon him, a security measure presumably put in place to stop thieves. The curse was fashioned to foil the will or robbers, assuming anyone who took the blade would be evil, so it sees every attempt to use the blade's powers result in a series of bad luck that works against the intent of the thief. However, since Malak's intent was to use the sword for good, the curse instead makes every one of his attempts to right wrongs only exasperate them. Over time Scirocco had to accept he was consigned to do evil despite/because of his altruistic nature. Though an admitted supervillain now, Scirocco has a strong sense of justice and has even reached out to a few superheroes. He tries to keep villains under his authority disciplined and honorable.

Scirocco will over the course of the game attempt a ritual to affect the the entire populace of the Rogue Isles. The Rite in question will make most evil people, robots, alien beings, etc., turn good and make the worst of the worst that are irredeemably evil simply cease to be. He will test this out on his sidekick Ice Mistral resulting in the normally sadistic villainess becoming overwhelmingly sweet. To build up the support he needs to undertake his plans, Scirocco will attempt to connect with one of his fellow Patrons. Black Scorpion is less than trustworthy and considers Scirocco too soft and so Scirocco's attempts to partner with him will seem a bad idea. Captain Mako sees Scirocco as a useless bleeding heart and Scirocco is rather appalled by the Mako's bloodlust so an alliance between the two becomes a nonstarter as well. At last though Scirocco chooses Ghost Widow as his ally as he feels she is the most sophisticated and he feels an emotional connection to her as she too is bound to Arachnos against her will. As a sign of good faith Scirocco will even give Ghost Widow a ritual that should be able to bring her back to life. Though Ghost Widow does not immediately trust the gift she accepts the gesture. And even after Scirocco's plans are undone by Lord Recluse and the player, Ghost Widow remains something of a crush for Scirocco.

Scirocco has the powers of wind and sand; allowing to manipulate existing sand storms or conjure his own. He can shape the wind and has the power to discharge electrical impulses. He has also demonstrated superb sword mastery. He has above average ability to take a hit and is far more nimble than most people. Though Scirocco has no inherent powers without his sword, which only has limited functions, he has gained tremendous expertise in most things magical from his research into the blade and his access to the Mu's mystic rites. Though it requires some moderate effort, Scirocco can adeptly preform rituals, as well as use magical objects with ease. He has an innate sixth sense now, that allows him to sense when something is off in his general area, allowing for things like detecting possession, illusion, mind-control and reality manipulation. Scirocco has learned how to channel Mu Bolts - which not only harm a foe but drain their energy. Mu Bolts are especially devastating and dangerous, as a player can be temporarily robbed of their superpowers after only a few hits.

The Mu are an ancient order of sorcerers with magic deep in their blood and training that allows them to access it. The Mu were hunted, sacrificed, possessed and killed off by a rival order known as the Circle of Thorns. The Circle of Thorns biggest advantage over the Mu was their contract with infernal forces and so the Mu sought protection from their ancient foe with the backing of the most powerful Incarnate they could find, Lord Recluse. Lord Recluse has placed the fate of the Mu in the hands of Scirocco, a duty that he takes very seriously. Though Scirocco himself is not a decedent of the Mu he is considered the head of the order and the Mu view him as a savior and master. It is said if Scirocco ever tried to leave Arachnos's employ Lord Recluse would have the Mu wiped out himself.

Scirocco's sword is one of the main sources of his power. 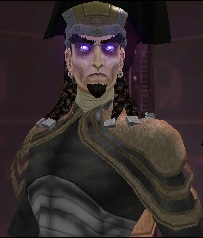 Scirocco offers training as one of the four main Patron's of Arachnos. 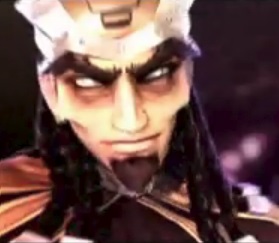 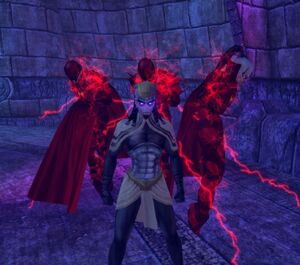 Scirocco fiercly guards the Mu and is guarded by them in return
Add a photo to this gallery
Retrieved from "https://villains.fandom.com/wiki/Scirocco?oldid=3780537"
Community content is available under CC-BY-SA unless otherwise noted.