Kill and get Alyssa's heart so they can carry out the ritual of engagement (failed).

The Scissor Twins (their true names are Ralph and Jemima (Rudy and Janis in the Japanese version), are major antagonists in Clock Tower 3. They were servants to Lord Burroughs, acting as his executioners and torturers. After the death of Burroughs, they were stoned to death by local villagers in retaliation. However, both were resurrected, sharing a single Entity between them.

Their exact origins are unknown, though the memo suggests that Twins were either picked up on the battlefield by the Burroughs family, or were brought over from the Orient. They showed a fascination for gutting and dismembering their victims while still alive, particularly with blades or scissors.

During Darcy Burroughs' rampage, the Scissor Twins serve as his executioners. A memo from one of Burroughs' employers states that he was forced to kill ten villagers within the first week, and twenty in the next, under their orders. After Lord Burroughs was finally caught and executed, Ralph and Jemima were stoned to death by the crowds, but they were resurrected as Subordinates and continued to wreck havoc on the world as a single Entity. Jemima had 22 victims and was sentenced to 396 years, and Ralph had 37 victims and was sentenced to 820 years.

Origins in Book of Entities V

The origins of Ralph and Jemima, the siblings who served Lord Burroughs, are unknown. Accounts relate that Burroughs picked them up on the battlefield, or that they were brought over from the Orient. However, none of these stories are more than hearsay. The siblings were horrendously cruel by nature, and it is said that they were the torturers and executioners during Lord Burroughs' bloody campaign.

Showing a peculiar fascination for blades and in particular, scissors, they found endless enjoyment in gutting or dismembering victims while still alive. When Lord Burroughs was finally killed, Ralph and Jemima were stoned to death by the crowds. Because both were possessed by the same Entity, they were resurrected together and continue to wreak havoc as Subordinates.

A statue of Jemima and Ralph is seen in the cave where Alyssa learns about the Ritual of Engagement, the statues standing at the right and the left stair's end.

Jemima then makes her debut when she disguises herself as Linda Owen in the Scissors' Hospital in order to lure Dennis Owen and Alyssa Hamilton inside. As she and Dennis embrace, she reveals herself, and she and Ralph take Dennis as a hostage, stating that if Alyssa wants him back, she will have to surrender her heart so that they can create a new Entity. The group then disappears.

Following this event, the Scissor Twins stalk Alyssa throughout the hospital; Ralph on the real side of the Looking Glass mirror, and Jemima on the other.

Jemima and Ralph continue to stalk Alyssa as she explores the Burroughs Castle. When she reaches the Castle Drawing Room, Ralph and Jemima reveal themselves on the projector, laughing as Dennis is strapped under a pendulum. When she reaches their location, the pendulum falls, splitting what appears to be Dennis in two, though this is promptly revealed to be a mere replica as Ralph states it was just a "dress rehearsal." The real Dennis is revealed, and Jemima threatens that if she doesn't give them her heart, Dennis will be "sliced and diced." As they close in on Alyssa, the floor below her crumbles and she falls into the depths below.

Back in the Castle Drawing Room, Alyssa sees Jemima and Ralph via the projector, taunting her after she discovers her grandfather's intentions. She hurries to the torture room where she is confronted by Jemima, and the two engage in battle. Jemima is defeated and afterwards, Ralph appears, infuriated, and attempts to hold Jemima's body as she explodes into confetti. Angered, he threatens to destroy Alyssa for killing his sister, but he too falls. Jemima and Ralph is later seen chanting with the rest of the Subordinate as Dick Hamilton prepares to perform the Ritual of Engagement on Alyssa. 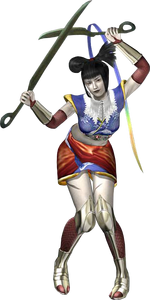 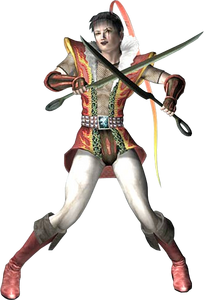 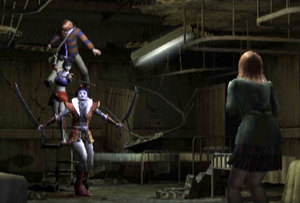 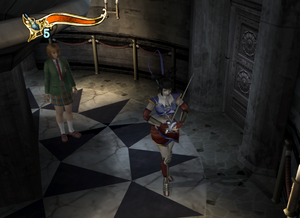 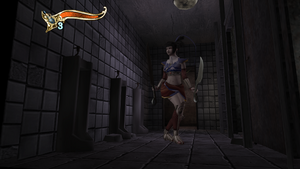 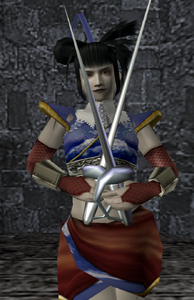 Scissorwoman in the torture chamber.

Scissorwoman in the torture chamber. 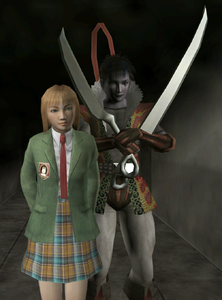 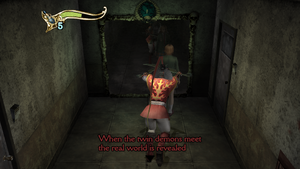 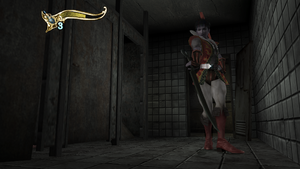 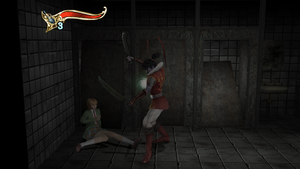 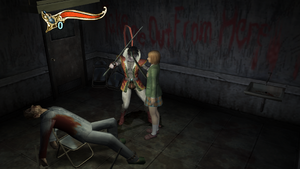 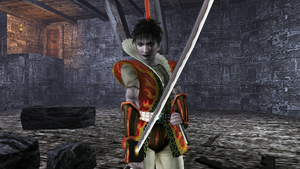 Scissorman in the torture chamber.

The Scissor Twins statue.
Add a photo to this gallery

Retrieved from "https://villains.fandom.com/wiki/Scissor_Twins?oldid=3471511"
Community content is available under CC-BY-SA unless otherwise noted.