Guardian for the green origami streamer

Slicing Bowser's soldiers and anyone in its way.

The Scissors, also called the Duel-Bladed Duelist, is a major antagonist in Paper Mario: The Origami King. It is a member of King Olly's Legion of Stationery, guards the green origami streamer, and the fifth member of the Legion to fight Mario. It is a sentient pair of green scissors with a sinister amusement for cutting things. Scissors is fought in Bowser's Castle's throne room, where the green origami streamer appears.

Scissors started as an ordinary and harmless pair of scissors used for crafting origami. When King Olly betrayed the Origami Master that created him, he took several of the Origami Master's tools and gave them sentience, including Scissors. Olly dubbed his new servants the Legion of Stationery and instructed each to guard the streamers that enveloped Princes Peach's castle, with Scissors sent to guard the green streamer at Bowser's Castle.

Scissors took over Bowser's Castle and sliced the remaining non-origami Koopa Troop members into pieces. When Bowser Jr. attempts to raid the castle to save his father, Scissors slices the youngster to pieces, although Mario, Olivia and Kamek restore his condition by using the hot springs of Shangri-Spa.

After Mario defeats the Boss Sumo Bro. guarding Bowser's Castle and Handaconda, he discovers that Scissors decorated the castle with the cut-up remains of the Koopa Troop. Upon reaching Bowser's throne room with the imprisoned folded king pinned by a paperclip, Scissors attempts to kill Mario, only for him to dodge its attack. Scissors claims that cutting Mario immediately wouldn't have been much fun and summons the Paper Mistake Buzzy Beetle, using the faces of the Koopa Troop and Kamek as armor. Upon Mario removing its armor and destroying it, Scissors comes down to engage him.

At first, Scissors gives Mario an advantage by sheathing its blades with a plastic cover, claiming that it would be too easy to cut Mario instantly. Attacking the plastic cover immediately starts the second phase, so Mario should rely on attacking the handles. Upon enough damage, Scissors uncovers its blades and attacks the rings, destroying several symbols before charging up an attack. Only hammers are ideal to attack it with while it's charging, as summoning the 1,000-Fold Arms makes Scissors block the attack, and it cuts up Mario if he jumps, dealing 999 damage to him and thus defeating him instantly. During its turns, Scissors performs a lunge at Mario, who must dodge the attack (which can break guards) by jumping to avoid immediate death. Note that Mario has a unique death animation for this attack: being sliced in half. Only by using the Ice Vellumental to freeze Scissors leaves it vulnerable to the 1,000-Fold Arms technique, where Mario can flip the frozen block to heavily damage Scissors.

Upon its defeat, Scissors simply falls over and explodes when Olivia pokes it. Its death also restores the cut-up Koopa Troop and Kamek back to normal.

After Olivia's wish reverts her brother's actions, Scissors turns back into regular scissors. 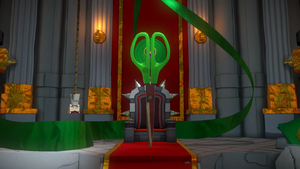 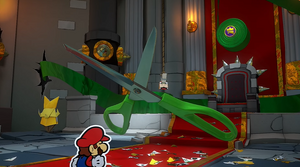 Scissors with its blades covered up. 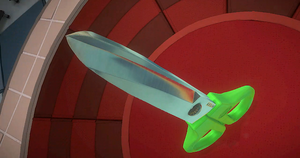 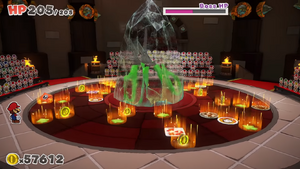 Scissors frozen in a block of ice from the Ice Vellumental. 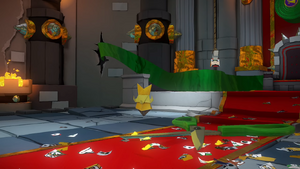 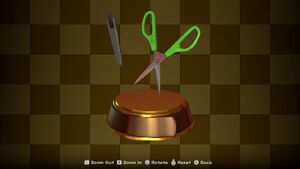 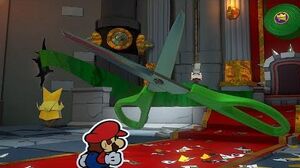 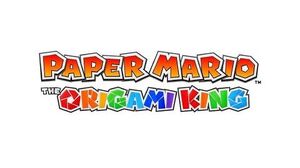