Scissorwalker is the main antagonist of NightCry. She stalks the player around the Oceanus ship, attempting to kill them before they can solve the game's mystery.

According to Hifumi Kono, Scissorwalker was a girl that burned to death in a fire during a night with her mother. It is possible that Jerome was once involved in this fire and survived, explaining his scars on his back, while Yolanda died. It is possible Yolanda died trying to protect Jerome.

The distorted cries of a child can be heard when Scissorwalker pursues the player.

Scissorwalker was brought to the cruise ship by a group of cultists that sneaked on board.

According to Vigo Boradsov's diary, it is heavily implied that Scissorwalker's full name is Yolanda Boradsov, and that Vigo raped and impregnated her with his son (and technically grandson) "Otto". There is a chance that Otto is Jerome Theuriau, meaning Jerome may be Scissorwalker's son.

Scissorwalker first appears to Monica Flores on the Oceanus. She kills Monica's friend, Harry, by dragging him into a vending machine and begins pursuing Monica throughout the ship. She also proceeded to conduct various acts of slaughter throughout the ship. Eventually, she managed to corner and kill Jessica Lopez, and also proceeded to use her corpse as bait to lure Monica towards her in a holding area.

Scissorwalker does not appear in the second chapter (she appears "It's all too late ending" which can be unlocked upon failing to meet certain requirements earlier), but she is indirectly referenced by Leonard Cosgrove, as he was trying to investigate the circumstances behind her slaughter on the ship.

Scissorwalker first appeared in a dream with Jerome Theuriau, where she merely approaches him (foreshadowing his connection to her). Eventually, she ended up hiding in the shower and activated it, luring Rooney Simpson into the area and causing her to encounter her.

She then spent her time pursuing Rooney, and also slaughtering several people throughout the ship. Scissorwalker also knocked Kelly Butler out in the movie theater of Oceanus. She later ambushed Rooney at the cargo holds, and eventually activated a conveyor belt in an attempt to get at her but failed.

Afterwards, she then managed to somehow infiltrate the holds, and proceeded to murder Maria Ortiz, shoving her up the vent just as Rooney was traversing through the ducts.

If Rooney hides from Scissorwalker, Scissorwalker is confronted by Angie Brown, whose husband she killed earlier. Angie sacrifices herself to help Rooney as Rooney watches her die. (It's unknown if this scene is a part of the story)

It is eventually revealed that she was under the command of Vigo Boradsov, who is her father (probably) and the one responsible for turning her into a monster. However, Rooney realizes that Vigo can control Scissorwalker over his false eye. Rooney proceeded to forcibly remove her own eye to utilize the false eye she found earlier inside the vault of Vigo Boradsov and thus convince Scissorwalker to exact her revenge against Vigo, which she did. She disappeared afterwards. 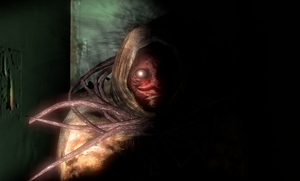 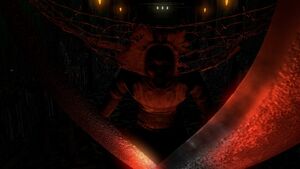 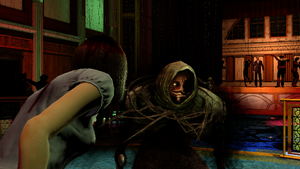 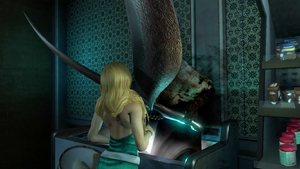 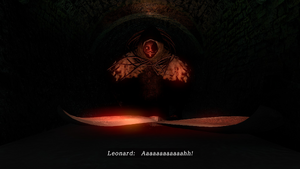 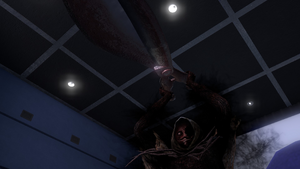 Retrieved from "https://villains.fandom.com/wiki/Scissorwalker?oldid=3805648"
Community content is available under CC-BY-SA unless otherwise noted.