Autarch and supreme leader of the Helghan Empire

Take over Helghan and establish the Helghan Empire (succeeded).

Give the Helghast people a sense of pride and purpose (succeeded).
Invade and conquer Vekta (failed).
Repeal the ISA Forces from Helghan (succeeded post-mortem).

Scolar Visari is the main antagonist of the Killzone franchise. He appears as the overall antagonist of Killzone, the main antagonist of Killzone 2, and the posthumous overarching antagonist of Killzone 3 and Shadow Fall. He is the founder of the Helghan Empire. He is extremely vicious, heartless, destructive, and violent, uniting the Helghan Nation through his charismatic and compelling leadership to become a major power on the interstellar stage. He embodies the traits of Helghan ultranationalism, being extremely bitter, vengeful, and dedicated to his vision of a strong and proud Helghan capable of taking its revenge on the United Colonial Nations for the defeat of the First Extrasolar War. Visari is killed by Rico Velasquez in Visari Palace during the retaliatory ISA invasion of Helghan.

He was voiced by Brian Cox, who also played Hannibal Lecter in Mindhunter, William Stryker in X2, Lionel Starkweather in Manhunt, Agamemnon in Troy, Pariah Dark in Danny Phantom: Reign Storm, General Hemmer in Battle For Terra and Ward Abbott in the Jason Bourne franchise.

Little is specifically known about Visari during his early life, however, what is known is that his family was highly influential and was the owner of the Visari Corperation which was the second largest on Helghan next to Stahl Arms. Unlike other Helghasts, Visari adapted to Helghan and its environment, thus he never required breathing technology that other Helghasts needed. As Visari grew up he ventured into the world of politics and with superior skills as a persuasive orator and charisma, he gained massive amounts of attention, respect, and overwhelming support from the people and eventually overthrew the Helghan Administration and took over Helghan in 2347. After seizing power, Visari began to claim that the Helghasts were a race the surpassed the human race and viewed them as corrupt and were responsible for years of hardships, pain, and failure that plagued Helghan after the defeat of the Helghan Corporation in the First Extrasolar War. Visari then siad that the masks that the majority of Helghasts had to wear were not to be symbols of shame but symbols of pride, strength, and success from years of hardships and bitter resentments and coined the term "Helghasts" as the name for the people. With his newfound popularity Visari soon became the leader of Helghan and created the totalitarian regime called the Helghan Empire that ruled over the entire planet and became the first Autarch after the masses rallied around him in full support and the growing hatred of the UCN and the Interplanetary Strategic Alliance (ISA) and even the Helghan Administration which failed to maintain order in Helghan. Visari's beliefs soon got him into power and took over all branches of Helghast society both rich and poor.

After Visari took over all of Helghan he began to reform Helghast society in his vision. First he began pushing propaganda into overtime and began to be seen and heard everywhere in Helghan on order to convince poor Helghasts to support him and his military dictatorship. Visari then promised to remake Helghast society and civilization stronger than ever and promised to make a civilization able to survive any disaster that would hit them and would still keep them on their feet. In 2349 Visari made written English illegal in an effort to make the Helghast people feel more unique and replaced it with a new alphabet and even attempted to created a new language but failed at it due to its sheer size and scope of such a feet. Visari soon created a black market route with the Independent Strategic Colonial Alliance and soon mass starvation came to an end as food began to pour in and soon Helghan's economy began to grow. Visari soon established military first policies and devoted massive amounts of resources into creating a new more soupirior military and soon he created the Helghan Empire and declared it a new country. With newfound military power, Visari soon created a plan to invade Vekta and conquer the whole planet 10 years after he was elected into power.

Visari soon used his country's newfound military strength and power to invade and conquer Vekta, an ISA planet and home to Helghan's future destroyers. The people eagerly loved and endorsed the plan to take over Vekta as revenge for the humiliating defeat in the First Extrasolar War and Visari would soon be named Emperor of the Helghasts if his invasion plan succeeded. Visari soon used two spies to disbale the ISA Orbital Defense Network and soon the Helghasts launched a full on massive assault on Vekta and laid waste to the Vektans who resisted and the ISA Troops who were defending the planet. Victory seemed swift but soon the Helghasts were repealed from the planet but the Red Dust nuclear weapon was stolen and sent to Helghan. The failed invasion soon led to the beginning of the Second Extrasolar War. When the ISA began to launch Operation Archangel, an invasion of Helghan Visari threatened to repeal the invasion and when the ISA arrived on Helgan and soon Helghast military forces lead by Colonel Radec open fired on the invading fleets leaving entire ships in flames and ruins and ISA troops pinned down on the beaches and slums and blood running all over the streets. Eventually Visari detonated the Red Dust nuclear bomb in the Helghast capitol of Pyhrrus killing both ISA Marines and his own soldiers alike. Despite heavy bloodshed and massive casualties Sergeant Sevchenko with Rico and a small detachment of ISA Marines made it to Visari's palace and soon after a duel with Radec, Visari confronted the two and was killed by Rico after claiming that his death would bring madness and Visari was right.

Visari is a strong, powerful, influential, authoritative, and charismatic person who was able to gain the hopes of the Helghast people and lead them to glory. He is also a brutal and oppressive dictator as the vast majority of Helghan's resources were devoted to the Helghatst Military leaving a little for domestic development, although he was able to end the famine that had harmed his people before his administration. Visari also seems to be absentminded and careless, as when he destroyed his own capitol, he was never shown regretting the Helghast troops were killed in the blast along with the ISA. He further believes that history is written by blood and does not long entrust the care of freedom to the weak or the timid. However, when the ISA begin invading Helghan in retaliation for the Helghast Empire’s failed attempt at invading Vekta, he makes sure that the majority of the populace would be evacuated to mining settlements and Constantine City before the assault on Pyrrhus, leading to fewer civilian casualties. He views himself and his fellow Helghast as being the next step in the evolution of humanity and are therefore superior to other humans. 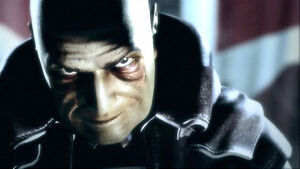