The Scooper Roidmude, originally designated as Roidmude 033, is an Advanced Roidmude and antagonist in Kamen Rider Drive.

He was voiced by Hiroshi Naka.

Roidmude 033 attempted to copy the data of news reporter Shunsuke Kusaka but was unable to because his greed was weaker. However, 033 was able to use Kusaka's desire of revenge on Kaishima City Buildings to temporarily evolve into Scooper Roidmude. With his new Advanced Roidmude form, 033 went to destroy the company's buildings which also allowed Kusaka to get news stories.

However, Kenta Imai, a former friend of Kusaka, discovered he had allied with Scooper and notified the Special Investigation Unit. Kenta and Kiriko went to Kusaka's next target, the International Sport Stadium, to stop him but the Hybrid Roidmude trapped them in a Heavy Acceleration. Scooper then achieved his full evolution and attempted to kill Kusaka, having no more need for him. But, Drive showed and used Tridoron to push him back, before destroying him with Full Throttle. 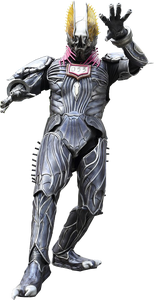 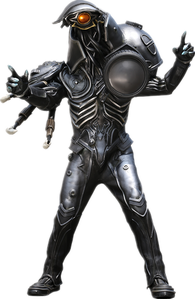