Using his powers behind S.H.I.E.L.D.'s back.

Kill Debbie and Raina for betraying and experimenting on him (succeeded with Debbie; Raina eventually died).

Chan Ho Yin, or also better known as Scorch, is the main antagonist of the Marvel's Agents of S.H.I.E.L.D. Season 1 episode "Girl in the Flower Dress". He was a pyrokinetic street magician who became embroiled in the Clairvoyant's Centipede Project.

He was portrayed by Louis Ozawa Changchien.

Before the events of the episode, Chan Ho Yin gained his powers through unknown reasons and one time may have accidentally caused the Wan Tei nuclear power plant to catch fire. His powers caught the attention of S.H.I.E.L.D., and Hong Kong-based agent Quan Chen told Chan to not use his powers, which angered Chan as he repeatedly violated this arrangement.

At the beginning of the episode, Chan's powers catch the eye of a woman named Raina, who had men capture him and brought to a lab, where he was injected with Extremis that enhanced his powers. Due to the heat-resistant platelets in his blood, his increased powers did not overheat or burn his skin. Having gotten what they wanted, the doctor, Debbie, had him sedated and his blood drained to collect the platelets.

After waking up, Chan Ho Yin learns of their deception and finds that his heat-resistant capability is gone. After Quan arrives with agents Phil Coulson and Melinda May to free him, Chan, not wanting to get controlled by the agency's authority again, injected himself witb Extremis, kills Quan and attacks Coulson and May. He then chased Debbie and Raina, who abandons the former to die. Although Debbie pleads for her life, Chan engulfs her in flames, killing her. Coulson then distracts Chan, allowing for May to overdose him with Extremis, therefore killing him as he explodes. 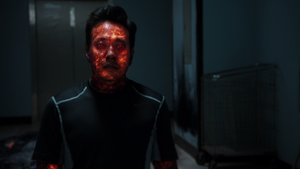 Scorch's death.
Add a photo to this gallery

Retrieved from "https://villains.fandom.com/wiki/Scorch_(Marvel_Cinematic_Universe)?oldid=3891723"
Community content is available under CC-BY-SA unless otherwise noted.