Go to war with the Candy Kingdom.

Assassinations (given the fact that he is wanted)

Mute Assassin
Scorcher is a minor villain in the Cartoon Network animated series Adventure Time. He is a hitman hired by Ice King to kill Finn and Jake in the episode "Hitman".

After Ice King gets grounded by Finn and Jake he decided to get back at them by hiring a hitman to hit them. He finds Scorcher on the internet a decides to hire him. When Scorcher goes to do his job he first tries to burn down Finn and Jake's treehouse until it was stopped by Ice King. After that Scorcher tried to suffocate Finn and Jake using smog, but it was all blown away by Ice King. Realizing that Scorcher is too dangerous Ice King tries to hire another hitman to kill him. He hires Blastronaunt to do the job, but Scorcher easily defeats him. Ice King then freezes Scorcher and goes to warn Finn and Jake about him. When Scorcher arrives he cashes after the three and attacks with fire blasts. Ice King then freezes Finn and Jake in order to trick scorcher into thinking that he killed them himself, which works and Scorcher leaves.

Scorcher appears near the end of "Gumbaldia" as a member of Uncle Gumbald's Legion of Candy Kingdom Haters who plan on going to war with the Candy Kingdom.

In "Come Along With Me" Scorcher witnesses the arrival of GOLB and runs away with Gumbald's army after Aunt Lolly asks for help to fight GOLB. 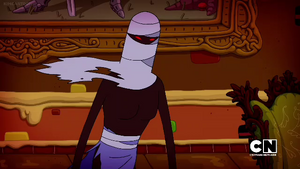 Scorcher on a wanted poster
Add a photo to this gallery

Retrieved from "https://villains.fandom.com/wiki/Scorcher?oldid=3823047"
Community content is available under CC-BY-SA unless otherwise noted.