Go on a killing spree in exchange for money (succeeded; temporarily).

Assault with a deadly weapon

Charles Davis, better known as Scorpio, is the main antagonist of the 1971 film Dirty Harry. He is a psychopathic serial killer who kills people of all ages in San Francisco and Harry Callahan's arch-enemy.

He was portrayed by Andrew "Andy" Robinson.

Scorpio's past is mostly a mystery. The film's novelization states he grew up in Springfield, Massachusetts, and killed his grandparents at a very young age. He was later sent to a mental hospital, but apparently escaped and moved to San Francisco. It is known that the groundskeeper at the local football stadium allowed him to live in a very small room within the stadium. At some point, Scorpio decided to go on a killing spree, all whilst extorting San Francisco. He first appears at the beginning of the film were he uses a sniper rifle to kill a young woman swimming in a pool.

He then leaves a note of his demands for the police. When "Dirty" Harry arrives at the crime scene he finds the note. Scorpio demands that he be paid 100 thousand dollars or he will kill a catholic priest or a black person. Later on when the city asks for time to get the money Scorpio decides to make good on his threat, but a helicopter patrol spots Scorpio as he is about to kill a black man with his sniper rifle. Scorpio is prevented from killing but manages to escape. Much later on, Scorpio kills a ten year old black boy by shooting part of his face off with the sniper rifle. The police then set up a trap for Scorpio. Since Scorpio said he would kill a Catholic Priest, Harry and his partner Chico Gonzalez stake out on the church rooftop at night waiting for Scorpio to arrive. Scorpio arrives with the intention to kill a priest and is caught off guard when Harry begins shooting at him. Scorpio and Harry shoot at each other but Scorpio manages to escape and murders a police officer in the process. Enraged at the police, Scorpio kidnaps a 14-year old girl named Ann Mary Deacon, and buries her alive. He demands money or he will leave her to die. The police are able to identify that she has really been kidnapped because Scorpio sent them one of her teeth that he pulled out with pliers. The Police Department gathered a whole bag full of thousands of dollars and Harry volunteered to be the bag man. Chico accompanied Harry. During that night Scorpio had Harry run from phone booth to phone booth to make sure Harry was alone and not bringing back up. Chico and Harry kept in contact with ear piece communicators and Chico kept out of sight from Scorpio. When Harry met Scorpio face to face, Scorpio began beating up Harry.

Scorpio betrayed his promise that he would let Ann go and would now kill Harry. Luckily Gonzalez showed up and rescues Harry but ended up getting shot but luckily he survived. Harry stabbed Scorpio in the leg with a switchblade yet Scorpio escaped again. However Scorpio now had a permanent limp and ran funny. Harry went to the doctor that treated Scorpio's leg wound and revealed where Scorpio lived. Harry went to the football stadium and chased after Scorpio. He interrogated Scorpio by stepping on his wounded leg so he would tell where Ann was buried when he would demand a lawyer instead of telling him where she was. Sadly, Ann was discovered dead. (It's discovered he already raped and murdered her prior to the events of the previous night) Scorpio was released from custody because his rights were violated and Harry illegally entered the area. Scorpio made sure Harry wouldn't follow him anymore by paying a thug to brutally beat him up. That way he made it look like Harry had been harassing him and would get him off his back.

Scorpio later went to a liquor store, and beats up the bartender so he could steal his Walther P38 pistol. Scorpio's last plan was hijacking a school bus and holding the kids hostage while demanding money from the police to board a plane to flee the country. Harry disobeyed the mayor and chief and went to ruin Scorpio's plan. He intercepted the bus and jumped right on top of it. Scorpio crashed the bus and the two had a brief shootout at a nearby factory.

Scorpio then sees a boy fishing at a lake and quickly takes him hostage while demanding Harry to drop his gun. Harry pretended to put it down, but then quickly shot Scorpio in the arm, letting the boy escape. As Harry approached the wounded killer, he cocks and points his revolver at the killer. Harry tells him he lost count of how many shots he fired and asked if he would risk the chance of trying to kill Harry. Despite being intimidated for a moment, Scorpio foolishly grabbed his gun and laughed maniacally. Harry immediately shot and killed Scorpio, who falls into the lake, dead at last.

Scorpio is sadistic, cowardly, abusive and psychopathic. He takes immense joy in killing and feels no remorse for his crimes or empathy for victims. He is always ready and willing to kill to avoid capture. He is even willing to take great amounts of physical pain to get ahead of his adversaries.

Although apparently insane, Scorpio has a very collected mind. He remembers to wear gloves so as to not leave behind any fingerprints. He also convinced everybody that his nemesis, "Dirty" Harry Callahan, was the one responsible for his facial injuries when in fact Scorpio paid someone to do it to him. However, he can be seen to get anxious when unable to kill his intended targets. He was obviously frustrated when he temporarily lost sight of a man he decided to kill and desperately tried to spot him again. He is also a total coward, claiming he had the right to a lawyer while Harry interrogated him and even going so far as to take a child hostage in a (failed) attempt to prevent Harry from shooting him. Scorpio is also a racist, saying in his ransom note that he would kill a "Catholic Priest or a n---er", and calling the thug he hired to beat him a "black son of a bitch".

While offering to stop his killing spree in exchange for 1000 dollars, it is clear that Scorpio derives too much pleasure from the killing in and of itself to be bought off. Even when Harry brought the money for the hostage exchange, Scorpio told him he was going to let her die anyway.

Scorpio appears to be very confident in himself. He is almost always seen to be casually walking towards his sniping spots and searching for victims. During his and Harry's final showdown, he believed he would come out on top and attempted to reach for his pistol, only to be blown to oblivion.

Scorpio has resorted to using many firearms throughout the film. It should be noted that all the firearms wielded by Scorpio were used by the Axis powers, excluding Fascist Italy, during World War II. :

Despite this, none of these weapons was any match for Harry's .44 Magnum revolver.

Scorpio about to kill a victim. 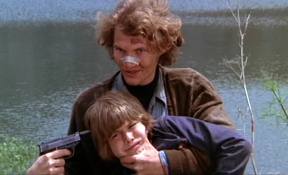 Scorpio moments before his death.

Scorpio's corpse after being shot to death by Harry.