Scorpio is the powerful beast of Quatros and a villain from Hero Factory.

Falling victim to the Witch Doctor's control, he serves to destroy intruders and protect him. He, Raw-Jaw and Waspix confronted the Heroes and called back to the doctor. He and Waspix were sent to destroy the remaining Heroes out in the jungle of Quatros.

Later, he follow Furno, Stringer and Nex to Witch Doctor's lair and freed from his Quaza spike by Furno. Getting revenge on the doctor, He command Raw-Jaw to battle Scorpio and he was toss off the ledge to the jungle floor.

In the Breakout event, he was imprison in Villain Storage and escaped with the Witch Doctor. Hinting he is under his control again.

Even with their large sizes, they can squeeze in small places. Also, a stinger tail and mounted ball shooter for capture prey, made of pured quaza. Heavy spiked armor plating and powerful pincers. Highly Intelligent and capable speech. Incredibly fast and use pincers on their mandibles to grab prey if close. 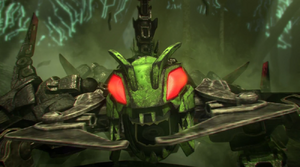 Retrieved from "https://villains.fandom.com/wiki/Scorpio_(Hero_Factory)?oldid=3498366"
Community content is available under CC-BY-SA unless otherwise noted.