Villains Wiki
Register
Don't have an account?
Sign In
Advertisement
in: Kung Fu Panda Villains, Evil from the Past, Animals,
and 37 more

Take over the Valley of Peace by turning it's inhabitants into her brainwashed slaves.
Exacting her revenge by pretending to be in love with Po's father, secretly poisoning his food. (both failed)

Scorpion (also known as Qiong Qi) is a major antagonist of the Nickelodeon television series Kung Fu Panda: Legends of Awesomeness. She's a hegemonic arachnid with the primary objective to take over the Valley of Peace. She makes several appearances in the series.

She is voiced by Lynn Milgrim.

Scorpion appears to be a red scorpion with black markings all over her body. Her body is standard in build and size to that of a normal scorpion. Her colors used to be yellow.

Scorpion was once a noble and respected healer that cured the sick. After accidentally stinging herself, she became heartless and cold. She began taking advantage of innocent civilians by brainwashing them and turning them into her slaves. She now only wants to conquer with her personal army of enslaved people.

Scorpion is very deceiving and strategic when it comes to getting what she wants. She went so far as to trick Po's father into loving her so that she could exact revenge for having been previously defeated. She managed to fool them up until when she found her moment to strike.

Scorpion herself is very skilled in physical combat, despite relying almost completely on her minions to do it for her. When she is forced to fight, she is very agile, her size and speed making it hard for her opponents to reach her. She is also very strong, being able to knock Po into walls.

In the past, Scorpion was a healer that cured the sick of their diseases. One day, she accidentally stung herself with her own stinger, causing her to turn evil and plot the destruction of the valley. She was able to brainwash an entire army of innocent civilians, waging them against the valley's protectors. She was eventually stopped by Master Oogway. She is was then imprisoned and banished, killing anyone who comes within her territory.

In Scorpion's Sting, Po and Monkey went in search of a "Sun Orchid" to cure Tigress's sickness. There was only one more in existence. To do this, they had to venture into the territory of Scorpion.

She noticed them inside of her magic caldron, and decided to kill them for trespassing. She was able to trap Monkey in a pit and then attack him, moving so fast that she couldn't touch him. She eventually stung him, and he was sent back to Po. Po took a while to figure out that he was hypnotized, all the while Monkey struggled to kill Po. Scorpion eventually lended some weapons, but still it was to no avail. Eventually, Po was able to snap Monkey out of the trance.

They hatched a plan to have Po pretend to be dead, sitting in the back of a cart while Monkey pretended to still be under the trance. Scorpion fell for it and led them back to her lair. That is when Po revealed himself and a fight ensued. After almost stinging them both, she was defeated and the Orchid was able to be retrieved.

In her second appearance, Scorpion pretended to be in love with Po's father, Ping. Po was skeptical of their relationship at first, but eventually was convinced of it's legitimacy. Both she and Ping prepared a special kind of Moon Cake for an upcoming festival. It wasn't until she completely gained Po's trust that she revealed her master plan. She has in fact poisoned the cakes so that she could exact revenge on her enemies. While everyone was knocked out, Po had to fight her in a half-conscious state while she struggled to sting him. Eventually, he was able to slam her into a wall and defeat her once more. 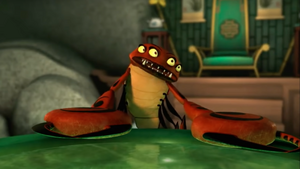 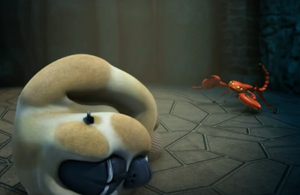 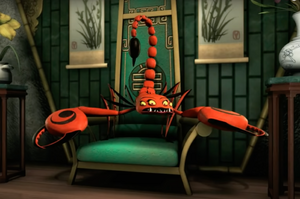 Scorpion on her throne. 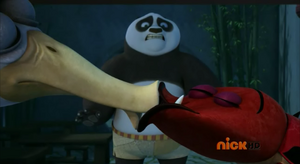 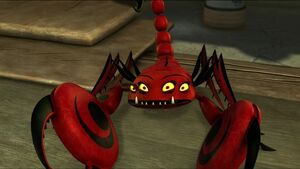 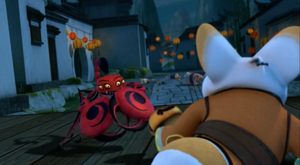 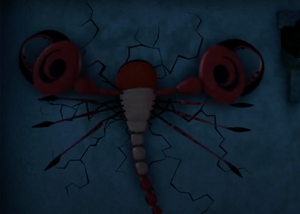 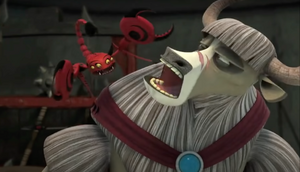 Scorpion angry at the guy who froze her.