Planning to kill Quan Chi for murdering his family and clan.

Serve his master, find, get revenge on, and kill Quan Chi (succeeded)
Put his soul to rest

Scorpion is an undead ninja warrior and an anti-hero in the Mortal Kombat franchise. Even though he is aligned neutral, he has done some antagonistic acts. In MK Armageddon, he allied with the Forces of Darkness to come closer to his enemy and creator, Quan Chi.

Born to the Shirai Ryu Ninja clan, Hanzo Hasashi was among the best shinobi in the clan. He earned the name "Sasori" (the Japanese word for "Scorpion") because of his incredible ninja skills, and his life was blessed with kombat for the glory of his clan's grandmaster.

However, when he received a mission from the vile necromancer Quan Chi to steal the sacred Map of Elements from the Order of Light's Shaolin Temple, Scorpion was brutally murdered in battle by the Lin Kuei warrior, Sub-Zero. Consequently his family, and his clan, were slaughtered by Quan Chi as payment to the Lin Kuei. Scorpion's soul was sent to the Netherrealm, where he laid waste. He fought Sub-Zero again in the Prison of Souls during his damnation, but was defeated again, allowing the Lin Kuei warrior to escape.

Scorpion has been depicted in many different ways through out the Mortal Kombat genre, but is always portrayed in a yellow ninja outfit with black pants, belt, undershirt, a balaclava with a yellow faceplate overlapping it, and occasionally two crossed swords mounted on his back.

When a human, he was known for his amazing, almost blinding speed and assassination skills. But when brought back as a demon, he had the ability to breath and control fire, teleport, and spawn a kunai (dubbed as "spear") tipped chain from his palm, launching it towards his opponent like a harpoon, and yank them over to his position, yelling with a signature 'GET OVER HERE!' or 'COME HERE!"

He also has an extremely high level of strength, like most Mortal Kombatants, able to rip off limbs with little to no problem. He also can take a comical amount of damage, withstanding having his neck broken, organs stabbed, and eyes gouged out.

Scorpion appears as a villain in the 1995 Mortal Kombat film, where he serves as a loyal minion of Shang Tsung, the film's main antagonist. He is portrayed by Chris Casamassa.

Scorpion is first seen aboard Shang Tsung's ship alongside Sub-Zero, where they prepare to battle Liu Kang, Sonya Blade and Johnny Cage. Raiden suddenly appears and blasts both Scorpion and Sub-Zero with powerful magic, knocking them out.

Scorpion appears later on during the Mortal Kombat tournament, where he faces Johnny Cage in a vast forest. Scorpion attacks him with a vicious insect concealed in his palm, but Johnny eventually lures it into a tree trunk, killing it on impact. Scorpion then warps himself to another location, but Johnny just manages to jump into the portal and teleports him. The battle continues in a red-illuminated chamber filled with shipwrecks, old weapons and human bones, with Scorpion revealing his true head as a mere skull before breathing fire at his opponent. Johnny grabs a razor-edged shield lying nearby to protect himself and then hurls a spear into Scorpion's arm. As Scorpion yells, Johnny finishes him off by slashing his chest and head with the razor shield, causing him to spontaneously combust before exploding. 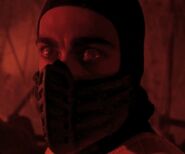 Scorpion about to breathe fire

The poster of Scorpion. 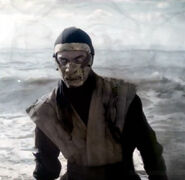 Add a photo to this gallery
Retrieved from "https://villains.fandom.com/wiki/Scorpion_(Mortal_Kombat)?oldid=1360196"
Community content is available under CC-BY-SA unless otherwise noted.