Scorponok is one of the Predacons who work for Megatron and a major antagonist in Transformers: Beast Wars. He is one of the original six Predacons to appear. Although loyal to Megatron (often being subjected to Black Arachnia's sarcasm) and genuinely believes in his cause, his ability to accomplish tasks the way Megatron demands him to do leaves him a lot to be desired. Because of this and other factors, no one seems to take Scorponok seriously. He is the archenemy of Dinobot.

He is voiced by Don Brown.

Scorponok, along with Megatron and his crews, was instructed by Cryotek to infiltrate B4-Y, a Maximal facility and steal Golden Disks hidden in there. His task was to install explosive devices in the facility. Although he was spotted by a Maximal security guard, his comrade Backslash, saved him and allowed him to accomplish his task successfully. As soon as he accomplished his task, this time Backslash was spotted by another Maximal security guard and was put in danger. Scorponok's response? Pushing the detonator, blowing up both Backslash (Backslash was loyal to Cryotek) and the Maximal guard along with the B4-Y. After paving the entrance for the rest of Predacons, Scorponok and the rest of Megatron's crew stole Golden Disk, purging Predacons who are not sided with Megatron, stole Darksyde and fled Cybertron.

During this time Scorponok's alternate mode was a hovercraft.

Scorponok is Megatron's second in command, following Dinobot's betrayal. The first thing we see him do is attack Dinobot when he challenged Megatron to a battle for leadership of the Predacons. Although talented at inventing things, his creations often has opposite effect of what he originally intended: e.g. when he creates cyberviruses, one example being a virus he afflicted Optimus Primal with in an attempt to turn him into a coward, but instead it made him a berserker. So like Tarantulas, Scorponok is a scientist, though is not quite as good at it as Tarantulas.

He is also a poor spy: for more than a few occasion Scorponok was ordered to spy on other treasonous Predacons but he managed to stop none of them from rebelling against Megatron. The only thing he can display proudly is his loyalty.

In the second episode, he fought Dinobot (who was now a Maximal) at a mountain full of Energon. In the episode "Dark Voyage", he blinded the maximals by blowing up some Energon. Despite his attempts to stop Maximals from reaching Axelon, Maximals managed to make it back to their base.

Scorponok is the rival of Terrorsaur, whom he disagrees with whenever Terrorsaur tries to take over as leader of the Predacons. He also has a rivalry with Inferno, a Maximal turned Predacon with fire ant form whose fanatical loyalty towards Megatron combined with superior fighting skills might have had jeopardized Scorponok's position as second-in-command had Scorponok lived longer.

In Episode 27, the Season 2 premier, "Aftermath", the quantum surge caused Scorponok to collide with Terrorsaur on his hover platform, and they both fell into the lava pit to their deaths. 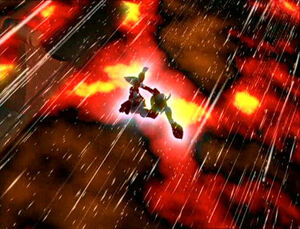 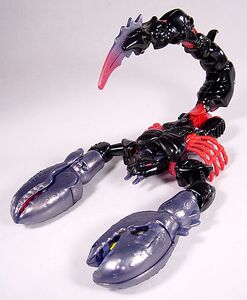