Scorponok is a scorpion-like Decepticon in Transformers: Robots in Disguise.

On Cybertron, Scorponok terrorized outlying communities largely outside the reach of the law, often tearing them down for simple enjoyment. He was eventually arrested and placed in a stasis pod aboard the Alchemor. After the ship crashed on Earth, Scorponok was one of three prisoners, alongside Glowstrike and Saberhorn, who organized the freed Decepticons into a militia and overthrew their Mini-Con prison guards, enslaving them. From there, they sent members of the group out to scavenge materials needed to get the Alchemor spaceworthy.

Scorponok and Glowstrike were unimpressed with neither Saberhorn's recent failure nor Kickback's work. As Glowstrike grouched, Scorponok noted they were stuck with the minions they had, when they were suddenly approached by Steeljaw, who had followed Kickback home.

Promised a group of elite warriors by Steeljaw, Scorponok and with his Mini-Cons Bludgeon and Clout arrived at the designated meeting place, soon joined by Crazybolt and Slicedice. The surly Scorponok was swiftly irritated by the pair's tardiness and their need for speed, not helped by Steeljaw's absence... not realizing that Steeljaw had set them up to get attacked by the Autobots (as a distraction for his own ends, and not caring whether Scorponok felled the Autobots or vice versa). His mood worsened as Crazybolt spouted his nonsensical maxim, but before he could start an altercation with him, the Autobots attacked.

Scorponok traded blows with Grimlock, being unimpressed with the Dinobot's combat skills, and soon got the upper claw on Grimlock, forcing Bumblebee to back off. The Autobot lieutenant distracted the Decepticon intimidator by claiming he knew of Steeljaw's desire to take Earth for himself, for its apparent magic. Bumblebee then used a little flim-flam to distract and confuse the Decepticons, setting them up for him and Grimlock to take them down. All five were captured and sealed in stasis pods. Steeljaw later fabricated a story that led Glowstrike to believe Scorponok betrayed the cause.

After the ex-Mini-Con prisoner Toolbox explained Scorponok and the other's rise to control of the crashed section of the Alchemor, Drift suggested that they work quickly to apprehend the trio, though Bumblebee pointed out that Scorponok had already been captured. Scorponok's stasis pod was later taken back to Cybertron by Optimus Prime, Windblade and Ratchet. 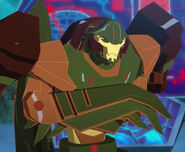 Scorponok's defeat
Add a photo to this gallery

Retrieved from "https://villains.fandom.com/wiki/Scorponok_(Transformers:_Robots_in_Disguise)?oldid=3708259"
Community content is available under CC-BY-SA unless otherwise noted.