NOTE: This article is about the incarnation of Scorponok from the Transformers live-action film series. The mainstream version can be found here: Scorponok.

Digging and moving under sand

Help the Decepticons to kill the Autobots and the humans (all failed).

Scorponok is a minor antagonist in the 2007 film Transformers and its 2009 sequel Revenge of the Fallen. He is a small Decepticon with a symbiotic connection to Blackout. His main drives are to hunt, destroy, and hunt some more, and nobody knows if he's truly barely sentient or is actually a cunning opponent getting friend & foe alike to underestimate him. Just as Blackout would often be found looming powerful and silent by Megatron, Scorponok is always near Blackout, except in those times he has been sent to kill.

Since he can tunnel underground with frightening speed, he's incredibly good at ambushing. His favorite pastime is playing Hide and Seek with unsuspecting players, be they robotic or organic. He prefers to be hider and seeker. On Cybertron, he was deliberately left behind on battlefields - so he could use his chameleon mesh armour plating to blend in perfectly with the background to ambush any Autobot patrols that would arrive. Megatron gave him more autonomy due to this than other Decepticons would get, as he admired Scorponok's genocidal zeal.

During Blackout's attack on US SOCCENT Forward Operations Base in Qatar, the Decepticon known as; Blackout dispatched Scorponok to seek out and destroy the escaped unit under the command of Captain Lennox.

The next morning, as the surviving soldiers discussed the attack, Scorponok observed their conversation from a distance while hidden in the sand. Targeting Lennox for elimination, Scorponok followed the unit as they made their way to the human boy's village. Choosing his moment to strike just as the men stopped on the outskirts of the settlement, his attack was foiled when Sergeant Epps saw the metal scorpion tail pointed at Lennox's back and shouted a warning. The other soldiers joined in the firefight as Scorponok dove under the sand to confuse them before impaling Sgt. Donnelly and dragging him below.

Driving the soldiers into the village, Scorponok fired a barrage of missiles which destroyed the ruins that the village had grown around and critically injured Figueroa. Unfortunately for Scorponok, Lennox's distress call to the Pentagon had gotten through, and an MQ-1 Predator drone relayed images of the Decepticon to astonished US military commanders. They immediately sent two A-10 Thunderbolt IIs to attack Scorponok to little effect, then followed up with an AC-130 Spectre gunship, which damaged Scorponok enough for him to dive back into the sand and escape, leaving his broken tail behind.

During the next two years, Scorponok regenerated his tail and survived in the desert.

Scorponok joins the battle after Jetfire kills Mixmaster. He fights Jetfire despite Jetfire being much bigger than him. Scorponok drills into his belly twice, mortally wounding him, but Jetfire tosses him off to the ground. As Scroponok rushed again, Jetfire crushes Scorponok's head with a single punch, killing him for good this time.

Scorponok about to ejected from Blackout.

Scorponok being ejected from Blackout.

Scorponok leaping out of the sand to attack Epps and company. 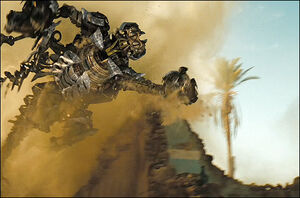 Scorponok returns in Revenge of the Fallen, just in time to jump out from the sand and attack Jetfire. 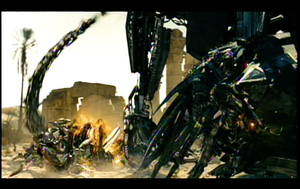 Scorponok's death
Add a photo to this gallery 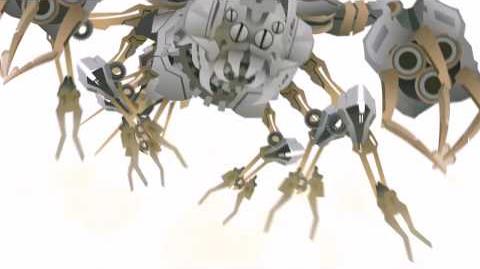 Retrieved from "https://villains.fandom.com/wiki/Scorponok_(Transformers_Film_Series)?oldid=3782926"
Community content is available under CC-BY-SA unless otherwise noted.