The Puppet-Master
The Storyteller
Animdude

Creator of the Five Nights at Freddy's universe

Satisfy the players of his games.(Ongoing)

Scott Cawthon (Also known as Animdude when recruited) is the main antagonist of the 2016 RPG game FNAF World, not counting Update 2 of the game. He is the creator of the Five Nights at Freddy's franchise, as well as many other games and animations he made.

Scott appears as the true final boss of FNAF World, only appearing when the player defeats Security on Hard Mode.

During his debut in FNAF World, Scott apparently resides in the game's core, since he serves as the creator and storyteller. When the player and his/her party goes through the portal in the circus tent after defeating the robotic owl Security, he appears, congratulating them at first. However, he explains that he is getting tired of attempting to satisfy the demand for more games, since he can't finally stop the demand. After this, he turns into a 3D version of himself, and attacks. After the player wins against him, he says the game suddenly ended, thanks to the player killing the storyteller, he then explodes.

He was theorized to be The Indie Developer from Five Nights at Freddy's VR: Help Wanted, but this was deconfirmed by real-life Scott.

His appearance is the three-dimensional representation of the developer's icon (who shares the same name) avatar which originally came from one of his previous games "There is No Pause Button!", appearing as a couple of cubes in the form of a figure. He is glowing entirely light blue. Interestingly enough, he is missing the sweat pixels in his Omega form.

Scott apparently doesn't like continuously working over and over. As a result, he became tired of the demand for more games, and vows not to make games and animations anymore. 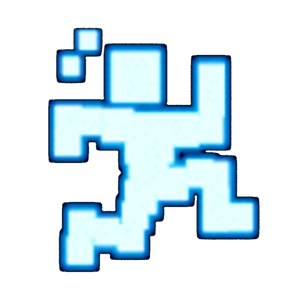