Heir to his Evil Empire

Rebelling against his father.

Be accepted by his father Doctor Evil (briefly succeeded).

Get revenge on Austin Powers.

Scott Powers, or better known as Scott Evil, is a major antagonist of the Austin Powers film series.

He is the son of Dr. Evil and Frau Farbissina, the nephew of Austin Powers and the grandson of Nigel Powers and was conceived in the 1960s when Dr. Evil took some of Powers' Mojo, although he was told as a child that he was artificially conceived in a laboratory.

He was portrayed by Seth Green, who also played Squint in Ice Age: The Great Egg-scapade.

Scott grew up in one of Dr. Evil's lairs while Dr. Evil was still frozen. Once Dr. Evil returned and learned that he had a son, he tried to bond with Scott, but Scott was resentful for his father being absent for so long and his father's comment that he wasn't "evil enough" on national television.

While Dr. Evil is an over-the-top villain with gratuitously elaborate schemes for world domination, Scott is a moderately intelligent young man with common sense. When learning of his father's evil schemes, Scott suggests ideas that are more straightforward and that would guarantee success (i.e. rather than slowly lowering the captured secret agent into a pool filled with mutated sea bass, why not just shoot him immediately with the gun you are pointing at him now?) Dr. Evil then dismisses Scott's ideas because, in his mind, Scott isn't evil enough to be taken seriously.

In the second film, Scott follows his father back through time and says that they may be able to work their differences out. Dr. Evil replies that his clone, Mini-Me is his heir now, as he was created in Dr. Evil's own image. Scott asserts that Mini-Me will probably try to kill him; both Dr. Evil and Mini-Me himself quickly agree ("He'll kill me the first chance he gets!" "Probably.") Later, Mini-Me draws a picture of Scott dying. Scott is angered and somewhat disturbed by the image but Dr. Evil refers to it as 'sweet' (although he does grimace as he hands the picture to Scott).

When Dr. Evil is released from prison in the third film, he returns to his Hollywood Lair to find a surprise. Scott has started to go bald, signifying that he is becoming more evil. He has also gotten a present for his father, a pit full of sharks with laser-beams on their heads (a reference to the first film in which Dr. Evil requested sharks "with frickin' lasers attatched to their heads" instead of the ill-tempered mutated sea bass procured by his henchmen). Scott quickly replaces Mini-Me at his father's side (causing Mini-Me to join Austin Powers.).

Also, when he helped his father dump Mr. Roboto into the shark tank to avoid having to pay a bonus, he seemed extremely exhilirated at Roboto's death to the point that even Dr. Evil was somewhat disturbed. At the end of the movie, however, Dr. Evil renounces his evil ways, enraging Scott, who takes over the criminal empire.

In the movie's final scene, Scott is dressed in black and is now completely bald. He says "I'm gonna get you, Austin Powers!" and mimics his father's evil laugh before dancing about the lair in the manner of the late Michael Jackson. 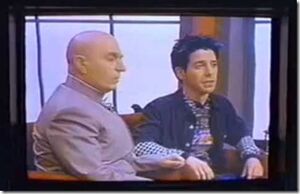 Scott and his father appears on Jerry Springer. 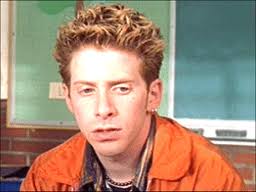 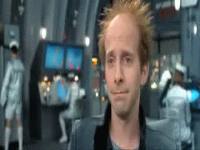 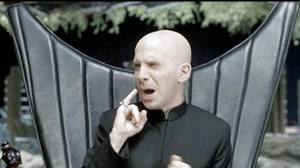