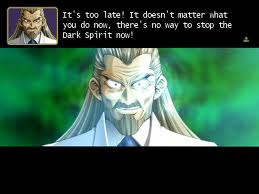 Scott Irvine is the main antagonist in the video game Yu-Gi-Oh! The Falsebound Kingdom. He was once a scientist working for Seto Kaiba but mysteriously disappeared and started his own battle deck game company.

He invited Yugi Muto, Seto Kaiba, Mokuba, Joey Wheeler and several other characters from the Yu-Gi-Oh! series and trapped them all in his RPG game.

He made the game in a medieval background but ruled over by Egyptian monarchs. Unknown if they were real or not, many good and bad guys from duelist kingdom and battle city appeared in the game who battled Yugi or Kaiba.

Scott appeared as a villain in the Yugi campaign and the Kaiba campaign but in Joey's campaign, a prequel, Scott did not appear and Marik Ishtar was the main antagonist. At the end of the game, he sacrifices himself to create the spirits of Darknite and Nitemare, the main antagonists in the Yu-gi-oh: Forbidden Memories video game. When Yugi and/or Kaiba wins the game, they wake up to find Scott's buidling on fire and it is unknown if he survived the flames.

Scott used Emperor Haysheen and his various generals from Forbidden memories in this game as well. On level 7, after Yugi defeats Emperor Haysheen in the Enno kingdom, Scott takes over, sends Haysheen to join Panik on his dead victim list and forces Yugi's team to retreat. On level 10, Yugi has a chance to fight Scott; Scott retreats without a fight, but not before capturing Tea, Joey and Bakura and hypnotizing them into serving him. Yugi succeeds in bringing Tea and Joey back to normal.

Yugi fights Strings who was under the mind control of Yami Bakura, who had formed a temporary alliance with Scott, for his own personal needs. Yugi beats Yami Bakura, brings Bakura back and defeats Arkana who's slain by Scott after losing to Yugi. Scott then forces Kaiba to duel Yugi but after the battle, the two work together to bring Scott down. Yugi confronts Scott at Syghs-Varths and learns that Scott is not the real threat to the game but a much deeper evil. Yugi defeats Scott anyway and Scott runs to the nearest kingdom in the deep part of the southern region. Yugi and all his friends find Scott in a secret room: the central hub of the game.

They find Scott in the heart of the CPU and he explains in an insane matter that he built the game as a portal for the 'dark spirit' to arrive and claim their souls. When he is defeated, he has a villainous breakdown and is vanquished by an evil spririt called the Darknite who uses Obelisk the Tormentor. When he and Nitemare (who you fight if you replay the game on a higher level) are defeated, Yugi and friends leave the building and no one knows what happened to Scott.

When Kaiba ends up in the game, he fights Emperor Haysheen in the same manner and Scott appears and Kaiba immediately recognizes him. Scott reveals that he worked for Kaibacorp and after witnessing the power of the Egyptian Gods during Battle City, he sought to acquire that power in Kingdom and reawaken ancient Egyptian spirits who can control the gods and rule the world.

After fighting with Scott's minion Seeker who Scott likely murders over losing, Mokuba becomes separated from the group and is captured by Scott. Scott's robot almost defeats Kaiba but Yugi arrives and defeats Scott's robot. However Scott forsaw this and brought reinforcements to make both parties retreat. After Kaiba fulfills his destiny in the game and captures the three Blue-Eyes White Dragons, he fights Scott again but Scott used the fight as a trap to get Kaiba out in the open and then uses Mokuba to get Kaiba to cooperate. He threatens to kill Mokuba unless he fights and beats Yugi to which Kaiba reluctantly agrees.

After winning, Yugi offers his service again and they beat Scott and rescue Mokuba. Kaiba and his team find Scott in the CPU and like in Yugi's campaign, he expresses his devotion to the dark spirit in a breakdown and is defeated once and for all. After he's vanquished, Darknite and then Nitemare (who you fight if you're replaying the game on a higher level) appear to which they both use Slifer the Sky Dragon. After they are defeated, Kaiba and Mokuba wake up and watch Scott's building burn but could not find him.