Hide his son's fetishes from the public in order to become President of the United States (failed).

Senator Scott McMillan is a major antagonist in the first season of Todd McFarlane's Spawn. He is the father of child-killer Billy Kincaid, Senator Scott McMillan tried very hard to keep his son's fetishes a secret from the public eye, due to his guilt of not being there for him when he was born. With the help of Jason Wynn, he was not only able to do that, but Wynn also helped fund his campaign for President of the United States.

He was voiced by Ronny Cox, who also voices Billy Kincaid.

At some point during his career, McMillan had an affair which resulted in the birth of his son, Billy, who would then grow up to be a child murderer. Feeling guilty, for letting this happen, McMillan did everything in his power to make sure his son’s actions were not exposed to the public.

After learning that a former technical officer recorded a conversation between him and Wynn about Billy, McMillan told Wynn who then had three mob hitmen kill the officer as well as the reporters he was going to sell the recording to, but the hitmen were then killed by the supernatural vigilante known as Spawn.

Jason Wynn talks with Tony Twist on the phone about how his three hitmen were killed. Tony thinks the kill was too clean and accuses Jason it was one of his men. As he hangs up the phone, Wynn makes a call to tell him the informant has been taken care of. Senator Scott McMillan tells him he will receive unlimited funding for his assistance.

While Sam and Twitch discuss murders, they turn on the TV and hearing McMillan has entered the race to become president.

Later on, McMillan gives a speech for his presidential race. After he gave his speech, he receives a phone call from Wynn and telling him his recent bill is written wrong and inhibits his goals. Wynn tells him to let the whole bill fail.

While Wynn was talking to Chapel, Wynn gets a call from McMillan saying someone's been hacking into the files of several politicians including himself. Wynn starts to suspect Wanda and Max. Wynn tells him to stay calm and he'll take of it.

Later at night, McMillan is taken to the wharf. A helicopter flies in, Chapel and Wynn step out of it. McMillan ask Wynn whats going on. Wynn tells McMillan something isn't right. He tells him that his son, Kincaid, has gone on yet another rampage, and he's messing with his plans. Wynn asks him who sent Kincaid and McMillan tells him he's innocent, Wynn leaves, McMillan tries to ask who told his son, but is stopped by Chapel then takes off.

Once Billy Kincaid was killed and his actions revealed to the public, McMillan's campaign went down. It is unknown what happens to him then.

When a reporter named Lisa Wu was investigating about the alley murders, she goes to a library and research old news articles about the events that occur in the first season. A photo of McMillan is seen on one titled "Senator McMillan's About-Face on Family Issues". 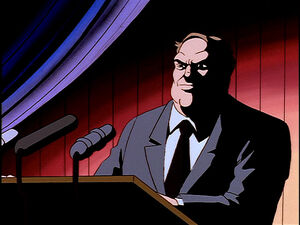 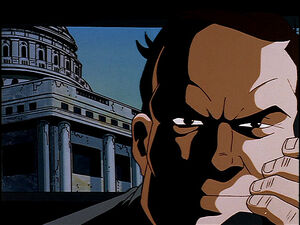 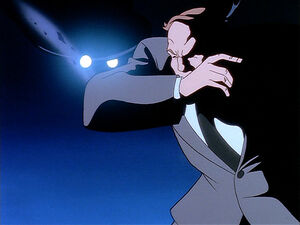