Necromancy
Contagions and alchemy to convert others into undead
Rune magic

Undead Destroyers
The Scourge are one of Azeroth's greatest threats and a major antagonistic force in the World of Warcraft universe.

The Scourge are another name for the undead and are bound to the will of the Lich King; however, a small faction of Scourge have managed to break free of the Lich King's control and became the Forsaken.

The Scourge range from mindless ghouls and skeletons to some of the most cunning and powerful necromancers and liches to ever exist, all share a common goal: to see the living exterminated and the undead rule supreme.

After the defeat of Arthas, Bolvar became the new Lich King, pacifying the Scourge. By the time of Cataclysm, which takes place shortly after Wrath of the Lich King, The Scourge, which was once a major adversary to the mortal heroes, were severly crippled. The ones that still fought mainly hung around the Plaguelands, still fighting for their former king.

Following the return of the Burning Legion in the Broken Isles, the Lich King Bolvar has entered into a pact with the Knights of the Ebon Blade, where the death knights of Acherus will once again act in the Lich King's name if the Scourge remains confined to Northrend. As part of this agreement, the Lich King has offered assistance to the Ebon Blade to obtain powerful artifacts to use against the Legion. 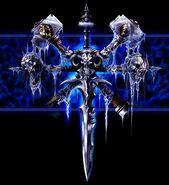