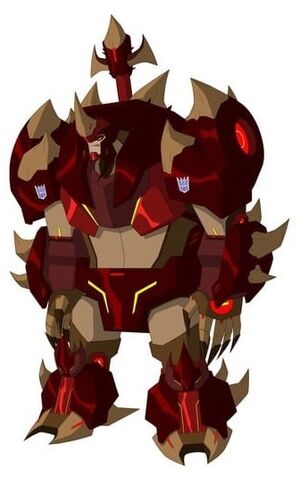 Scowl is a Decepticon-allied Dinobot who worked with Thunderhoof in Transformers: Robots in Disguise.

He was voiced by Mark Hildreth, who also voiced Red King in Planet Hulk, Davy Jones in the Pirates of the Caribbean: At World's End video game and Quicksilver in Wolverine & the X-Men.

He was the wrecker whom worked as Thunderhoof's hired muscle whom often tasked to took down buildings on the land that Thunderhoof's criminal organization had illicitly acquired. His heinous act are what caused him to be incarcerated in one of statis pod in Alchemor until freed by Megatronus by crash-landed it.

When Grimlock met him, they at first went in good terms as they demolished an old abandoned stadion together. Afterwards, they went on separated ways and Grimlock told his experience to Bumblebee and the others, whom immediately consult with Fixit's computer and revealed Scowl's nature as prisoner whom incarcerated for demolishing any lands that conquered by Thunderhoof's crime empire. With Thunderhoof still at large, Bumblebee believes that Scowl may have met Thunderhoof and they planned for using Grimlock as the bait for destroying the Autobots.

Grimlock however, tried to defend Scowl that Scowl may not so bad at all as he mostly love destroying some stuff and may can be reasoned with like himself. In the mid of the conversazation however, Scowl, whom unexpectedly showed up and felt betrayed due to Grimlock revealed  have good terms with Autobots whom happened to be Thunderhoof's foe, accused him as the traitor. Although Grimlock tries to reasoned to his "buddy," Scowl brings down a tree on the Autobots and flees.

The Decepticon then headed toward a nearby rail station, hoping to knock down the elevated tracks and derail the approaching passenger train. Grimlock and the others managed to catch up with him and the two Dinobots battled one another while the other Autobots tried to hold up the tracks. Grimlock gained the upper hand, and knocked Scowl into the station roof, sending him flying and temporarily taking him out of commission.

Unfortunately, Scowl managed to free himself before the Autobots could cuff him, and ploughed into a local spa, where he terrorized the humans that were there. The Autobots tried to hunt down Scowl without blowing their cover. In the showers, Scowl took out Drift and his two students, Slipstream, and Jetstorm. Scowl heard Grimlock say Scowl's line and immediately attacked him through a wall. Scowl then tried to bring down the ceiling on a group of meditating humans, only to be stopped by Grimlock. The two fought again in their dino modes and Scowl gained the upper hand. While on the floor, Grimlock had an apparent change of heart, and confessed that it's more fun to do whatever he wants instead of being told by some Autobot. Following his comment, Scowl was happy at Grimlock's decision and told him to give him a tail five. Instead of giving his former friend a tail five, Grimlock hits a nearby stone ornament in a fountain and sends it directly at Scowl, leaving the Decepticon unconscious. Before he was fully incapacitated, Scowl heard Grimlock say that just because something was fun to do, it does not make it right. The other Autobots came and arrested Scowl. Scowl's stasis pod was later taken back to Cybertron by Optimus Prime, Windblade, and Ratchet.