Walking with Dinosaurs The 3D Movie

Leader of the herd (formerly)

Trying to impress his father.

Have Juniper as his mate (succeeded, briefly).

He was voiced by Skyler Stone.

Scowler is first seen in the film as a young hatchling with his other siblings eating food that their mother has given them but refuses to share it with his smaller brother Patchi who finds a small part of food near the nest and eats that but is taken by a Troodon but is saved by his father Bulldust and is left with a hole in his frill and is put back in the nest with Scowler and the other hatchlings.

Sometime later, Scowler is seen joining Patchi and Bulldust knocking down trees, Scowler easily does this, but Patchi has difficulty which causes Scowler to ask his father if they are from the same litter. Scowler later practices head butting with Patchi, but gives up after Patchi fails miserably. He is later seen migrating with his family and the rest of their herd. Suddenly a fire starts and the herd try to get to safety. but they are attacked by a dangerous pack of Gorgosaurus.

Scowler and Patchi are separated from the herd and are chased by the Gorgosaurus leader named Gorgon, but are saved by Bulldust who dies fighting the creature whilst their mother and siblings are killed by other members of the pack. After this the two brothers rejoin their herd now led by another Patchyrhinosaurus named Major, but the herd is attacked again and the brothers along with Patchi's friend Juniper fall into a river and are once again separated from the herd. The trio end up washed ashore on a beach where a herd of Edmontosaurus are walking by to which Scowler joins them, whilst Patchi stays behind to care for Juniper who had hurt her leg but they eventually catch up with Scowler and the rest of the herd.

Years later a now adult Scowler fights with Major in a duel and won the leadership of the herd. He then chooses Juniper to be his mate, much to Patchi's dismay as he also had feelings for her. He then foolishly leads the herd over a frozen lake in the middle of spring. As the ice breaks, Scowler and some of the males make it to the other side of the lake while watching Patchi angrily as he takes the rest of the herd and Juniper around the lake to avoid death.

Later, Scowler confronts Patchi and accuses him of taking the herd and Juniper from him, before the two brothers battle. Scowler wins the fight and banishes Patchi from the herd, before ordering the rest of the herd to leave. Scowler then demands Juniper (who wishes to help Patchi) to leave with him too. When Juniper says that Scowler should help his brother, he replies that he does not have a brother, before forcing Juniper to leave with him.

Scowler is last seen battling Gorgon and his two Gorgosaurus. When becoming overpowered, he tells Patchi to take the herd, and was on the brink of death, was saved when Patchi and the herd came to his rescue. At the end, Scowler apologized to Patchi for being such a jerk to him and allows Patchi to be the new leader of the herd and also allows for him to be with Juniper. He became the uncle of Patchi and Juniper's offspring.

Baby Scowler with Patchi and their siblings.

Scowler with Patchi, their father Bulldust, and the rest of the herd. 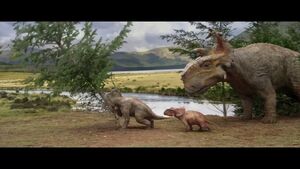 Scowler trying to knock over a tree whilst being watched by Patchi and Bulldust. 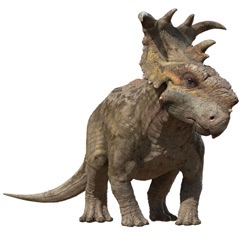 Adult Scowler fighting Major for leadership of the herd.

Scowler with Patchi and Juniper.

Scowler accusing Patchi of trying to overthrow him and steal Juniper from him. 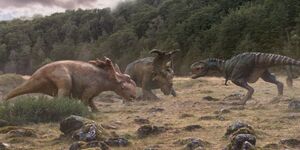 Scowler and Juniper facing a Gorgosaurus.