Do everything what Serleena orders them to do (failed).

Scrad and Charlie are the secondary antagonists of the 2002 sci-fi comedy film Men In Black II. They are the two right-hand minions of Serleena.

They were both portrayed by Johnny Knoxville.

Scrad has another head coming out of his backpack (Charlie), although it is the same head, and just a long neck. Scrad is basically a moron, not realizing when people are talking to him, or telling him what to do. Serleena knew Scrad and Charlie, as she came right to him when she came to Earth. They worked together in the infiltration of the Men in Black Headquarters.

Scrad and Charlie first appeared when Serleena appeared at their apartment. At first, they don't recognize, but when an annoyed Serleena plugged her tentacle into Scrad's ears, they finally caught up to her. They later get involved in Serleena's takeover of the MiB HQ (by faking a heart attack) and the release of the alien criminals in exchange for their cooperation.

It is unknown what happened to Scrad and Charlie following Serleena's death at the hands of Agents J and K. 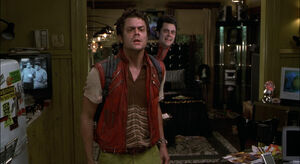 (Scrad:W-Who are you, and how'd you get in here?) (Charlie: You like egg salad?)

Scrad and Charlie offer a deal with Serleena about having 50 million dollars, but Serleena puts two tentacles into their ears instead. 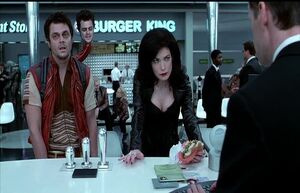 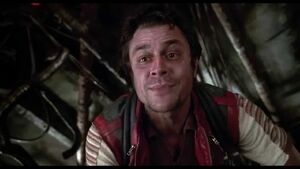 Scrad talks to Agent J where Agent K is. 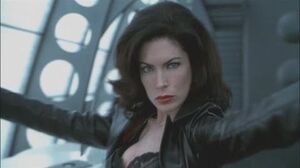