Devouring their Transformer hosts from inside out

Eat, reproduce, and eat some more.

Scraplets are one of Cybertron's worst pests. Working as a large swarm, they break up and consume metal. They seem to have a particular taste for living Cybertronian metal. During the Great War on Cybertron, Cybertronians managed to capture them and place them in pods as traps for the curious enemies to find. Like other Cybertronian species, they are highly susceptible to cold temperatures.

When Ratbat the Decepticon was tasked to transport the first prototype Wash and Roll, a hypnotic trap devised by Ratbat disguising as an automated drive-through car wash, to Earth, he hired a freighter to fly his cargo there. After coming out through warp space, the freighter's pilot had to exit to do some necessary repairs while the freighter continues its course. As he did, the ship passed through what seemed to be a space dust. But the dust rapidly infects the pilot, who lost control of his ship, causing it to crash on Earth.

Realizing he lost contact with the pilot for a while now, Ratbat dispatches Triple Changers to find out what happened to the freighter that carries his cargo. Triple Changers find the infected and incapacitated freighter pilot near the crashed freighter, but they do not get very far in interrogating him about his failure as they too become infected by the very dust that infected the pilot.

Autobots Blaster and Goldbug arrive, Only for Blaster to get infected. The freighter pilot survives long enough to warn Goldbug about the infection before his head falls off and go offline. It is then the identity of infectious dust is revealed: it is a large swarm of human-sized robotic parasites called Scraplets. Scraplets charge toward Goldbug but was saved by his human friend named Charlie Fong. But as the two retreat to try and find a cure for Blaster, Goldbug hesitates, not wanting to abandon his buddy, and he too was infected.

Aware of the infection by a report from Astrotrain, one of the Triple Changers, Ratbat decided to contain Scraplet menace by himself. Not wishing to risk more Decepticon lives, he manages to capture five members from Autobot's Throttlebot team and sends them to Earth. His mission for them? Use vats of acid spray to destroy all infected Transformers on the planet, Autobots and Decepticons alike.

Charlie Fong struggles with Goldbug (in the transformed state) through the desert, eventually making their way to a service station, where the appalled attendants offer him a glass of water. Charlie discovers Water to be 'the miracle cure' against Scraplets when he spills some water on Goldbug to see the splashed Scraplets die and fall off. Before Charlie washes Goldbug, he has to deal with suspicious attendants and two of the Throttlebots attempting to destroy Goldbug (much to their regrets), which the scientist deals successfully. More members of Throttlebot team Rollbar and Wide Load arrive, stand by while Charlie hosed down Goldbug, curing him.

Goldbug and company return to the crash site with two tankers of water to save Blaster from the worsening infection, but they also have the dilemma of curing the three Decepticons along with him. Before they could decide what to do, thousands of the Scraplets combined into a gigantic form, bashing Throttlebots around and infecting them in the ensuing melee. Goldbug cures the Decepticons, who use their firepowers to bring down the giant, which Blaster then destroys with acid vats Throttlebots have. The remaining water was used to remove the Scraplets which infected the Throttlebots during the battle, and the outbreak on Earth ended.

Transformers: Rise of the Dark Spark

Scraplets didn't make any appearance for this game. While Optimus and Jazz are infiltrating Kolkular to rescue Cliffjumper and dispose of the Dark Spark, Jazz believe the fortress' turrets are meant to shoot off Scraplets only for Optimus to agree jovially that even Megatron have to exterminate pests.

In the episode, "Scrapheap", Bumblebee & Bulkhead found a Scraplet-trap in the Arctic. Not knowing what it was, they brought it back to the Autobot base. Eventually, the Scraplets warmed up and ate through the metal trap. One was met by Raf who initially thought it was a pet of the Autobots. However, when he showed the Scraplet to the Autobots they reacted with fear, especially Bulkhead. Noticing the living metal in front of it, the Scraplet suddenly ran across the floor and attacked Bumblebee, managing to give him a large wound before Raf smashed the Scraplet. The group searched for the rest of the swarm.

Eventually, they found it but were overwhelmed by the sheer number of them. Luckily, since they do not eat organics, the human children managed to hold off the swarm just enough for Ratchet to open a Groundbridge to the Artic. Not only did this rescue a stranded Optimus and Arcee, but with Bulkhead luring them through, it also refroze the swarm. In Orion Pax part 3, a swarm was seen consuming the ruins of Cybertron. When Jack Darby opened the door to Vector Sigma, they followed him. When Vector Sigma began downloading information into its Key, the Scraplets swarmed and began to consume it. At this point, Jack Darby was attacked by an Insecticon. Thinking quickly, Jack grabbed one of the Scraplets and tossed it at the Insecticon. Sensing the living metal, the rest of the Scraplets swarmed around the insecticon and in a mad fury to be rid of them, the Insecticon fell down a large chasm with Scraplets not far behind. When Acree woke up from her unconsciousness, a scraplet chewing her foot only to destroy it out of annoyance.

In Transformers Primes, Scraplets are harmless to humans. Jack throw one of the Scraplets to an Insecticon in order the hordes to devour the Decepticon Sentry. 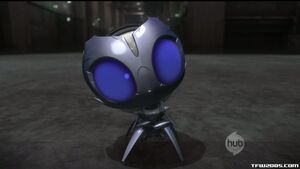 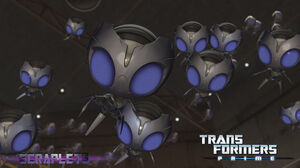 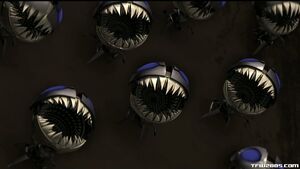 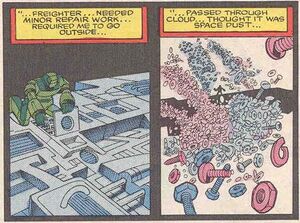