NOTE: This article is about the incarnation of Scrapper from the Transformers live-action film series. The mainstream version can be found here: Scrapper (Transformers).

Scrapper is a recurring antagonist of the Transformers Cinematic Universe. He is a Constructicon who transforms into a Catterpillar 992G front-end loader & forms the right arm of Devastator.

Scrapper is seen amongst Starscream's Decepticon group consisting of Long Haul, Rampage, Ravage & Bonecrusher (or presumingly a lookalike drone) searching for Sam Witwicky & Mikaela Banes. He is briefly seen in only 10 seconds trying to crush both of them with his mace after the two were exposed out of their hiding place. He, alongside Long Haul, Bonecrusher & many other Decepticons are killed in an airstrike.

Another Scrapper who didn't transform into robot mode was briefly seen forming the right arm of Devastator before being killed by a railgun.

Scrapper (or perhaps a lookalike drone) was briefly seen in the Battle of Chicago were he is the last Decepticon killed by Optimus Prime before he proceeded in killing Shockwave & fighting Sentinel Prime. 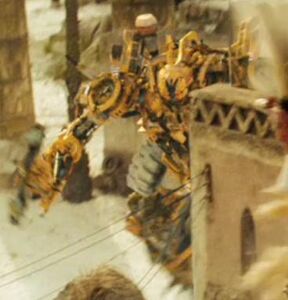 Scrapper as temporarily seen in Revenge of the Fallen

Scrapper in the third film before being killed by Optimus Prime 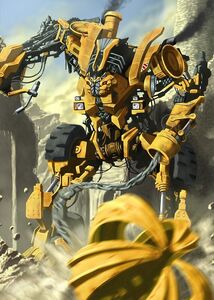 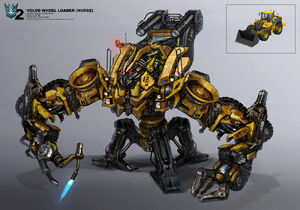 Retrieved from "https://villains.fandom.com/wiki/Scrapper_(Transformers_Film_Series)?oldid=3931903"
Community content is available under CC-BY-SA unless otherwise noted.