Scooby-Doo and Scrappy-Doo: The Scarab Lives

Transformation into a monster and help from Daemon Ritus

Join the gang and become their leader (formerly).
Have revenge on the gang for abandoning him and rule the world with his monster army (all failed).

Scrappy Cornelius "Dappy" Doo is the tritagonist in the Scooby-Doo franchise and the hidden main antagonist of the first live-action Scooby-Doo film. He is Scooby's spoiled nephew who turned evil due to Mystery, Inc. dropping him from the gang for being a nuisance and especially for demanding to become the new leader.

After years of plotting revenge and gathering criminals and the native demons of Spooky Island as henchmen (and replacing and impersonating Emile Mondavarious using a robot suit), Scrappy intended to use the Daemon Ritus to absorb enough souls (his own uncle Scooby's intended to be included as the purest soul, which would complete the transformation) to become Scrappy Rex and rule the world with his demon army, but was thwarted by Mystery, Inc. and arrested.

Introduced in 1979, Scrappy is infamous as one of the most hated fictional characters of all time. He was extremely obnoxious and annoying, he effectively replaced Fred, Velma, and Daphne on the show, and the cartoons he was in had actual monsters who were dealt with in a generic slapstick manner and whose existence wasn't even acknowledged as unusual.

Because of this, Scrappy became the main villain of the live-action Scooby-Doo film, after about 15 years of absence from the franchise and never appearing again afterwards.

During a flashback recalled by Velma at one point in the film, Scrappy is seen harassing the gang in the Mystery Machine, bragging about how he will fight ghosts and monsters. Fred tells him he has told him before ghosts don't exist (referencing the fact that the versions of the show Scrappy is in by portraying real supernatural creatures as commonplace). Scrappy argues that ghosts do exist and when he finds them, he'll give them a dose of "puppy power" and he then urinates on Daphne. When Scrappy realizes this, he gasps in shock and Fred immediately stops the Mystery Machine, sending Scrappy flying into the windscreen.

As he slides off, Fred scolds him for urinating on Daphne. After fixing himself, Scrappy crosses his arms and irritably insists it was an accident, but Fred calls his bluff and tells him he was marking his territory. Now realizing that Fred is protective of Daphne since he is the leader, Scrappy angrily tells him he isn't worthy of being the team leader. He orders the gang to listen and announces it is time to appoint him as their "unquestioned" leader or else he'll leave.  Scrappy is then unceremoniously thrown out of the van in the middle of the desert along with his suitcase, with no one giving a second thought.

The puppy hollers out to them they can't do that since people adore him (which is not exactly true). He then kicks his suitcase in anger and frustration, knocking it over and hurting his foot. Scrappy says he's as cute as "a Powerpuff Girl" and that he'll get his own TV show as he sits on his suitcase, alone and friendless.

Several years later, Scrappy built a mechanical version of Emile Mondavarious, the owner of Spooky Island, abducting him so that he could use the robot to impersonate him. He had teamed up with an insane man named N'Goo and his evil cohort Zarkos. Scrappy and his allies created an army of monstrous demons through voodoo, but the monsters die when exposed to sunlight, so they possessed humans to become immune to sunlight while the souls of the people were converted into protoplasm and kept in the cave beneath the island.  By absorbing the souls, Scrappy is able to become a powerful monster known as Scrappy Rex.

He only needed Scooby's protoplasm (a "pure soul") to complete his transformation and become unstoppable. He then chased Scooby and Shaggy until he had them cornered. He then managed to catch Scooby after Mary Jane hands him over. Scrappy taunts Scooby by dangling him in the air and commenting how small he is, Scooby retaliates by sticking his hands up Scrappy's nose and pulling his boogers. Scrappy yelps and flings him out but then sneezes on Scooby. Scooby tells Scrappy to sit down and punches his nose, making Scrappy roar angrily in his face and take him over to the Pinscher to extract his protoplasm. But Zarkos falls over the vat after his fight with Daphne (who pushed him in), releasing the people's protoplasm. Enraged, Scrappy tells the Mystery, Inc. gang their fight isn't over and he'll still kill them, but Shaggy gets Scrappy's attention by calling him a bad puppy and he finally defeats Scrappy Rex by pulling the Daemon Ritus out of his chest and destroying it. While screaming in terror and horror, he loses all of his protoplasm and then morphs back into Scrappy-Doo. Scrappy faces his uncle, telling him he can still take him and he challenges him to a rematch, but Scooby easily whacks Scrappy into a wall. In response, Scrappy says, "Is that all you got?" and Scooby shrugs.

Scrappy and his henchmen are then taken to prison when the police helicopters arrived on the scene, with Scrappy being taken away in a dog cage. His last words to the gang are, "And I would have gotten away with it, too! If not for you meddling sons of--", only to be cut off by a police officer shutting the door as the puppy continues to rant and rave. The gang are in shock over Scrappy almost saying the bad word (also wondering where he heard it), but the subject is immediately changed with the news people talking to the gang again.

It's currently unknown what happened to Scrappy and his henchmen in the end. But, they most likely remained in prison for life.

Scrappy was characterized by extreme arrogance and egomania, believing he could overpower any opponents with his "puppy power". He was also disrespectful towards the gang and frequently mocked them, calling them "losers" (and later, even trying to call them "meddling sons of--", but was cut off before he could finish). His insistence that ghosts were real, coupled with his obnoxious behavior, annoyed Mystery, Inc. to no end, culminating with Scrappy arrogantly demanding that they appoint him their "unquestioned" leader or else he would leave, foolishly believing that they valued his company, when in reality, they would gladly take the chance to get rid of him. This led to his abandonment, which would cause his downward spiral into outright villainy.

As a villain, Scrappy showed no problem with committing murder and kidnapping and was perfectly happy to consume the souls of thousands (perhaps millions) of innocent people in order to increase his own power, kill Mystery, Inc., and rule the world with his army of monsters. Upon assuming the form of Scrappy Rex, he became even more brutal and arrogant, and even after his defeat, he still insisted he could kill the gang, only to be quickly overpowered (though his ego was not damaged in the slightest).

The Scrappy from the cartoons was also tough-acting and overconfident, though not as obnoxious and to a much lesser extent, and was also more analytical and intelligent, sometimes proving to be an even better sleuth than most of the gang, with the possible exception of Velma. He also idolized Scooby and was firmly loyal to the group, often courageously (or brazenly) standing up for them when they were being attacked. How Scrappy went from cocky but heroic to obnoxious and demanding (then villainous and cruel) is unknown, though perhaps in the cartoons, he never became a villain and/or something terrible happened to him — or was caused by him, inadvertently or otherwise — that caused the gang to stop talking about him.

Scrappy lying about his "accident" 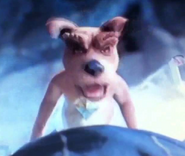 Scrappy unmasked as a robot pilot

Scrappy turning into a monster

Scrappy as a monster 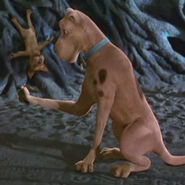 Scrappy being smacked by Scooby

"I would've gotten away with it too, if you weren't for you meddling sons of––"(chopper door slams shut)

Scrappy in a gangster outfit in an online coloring game

Scrappy Stinks game
Add a photo to this gallery

In his normal form in the live action film, Scrappy is a small Great Dane like Scooby but wears a black spiked collar unlike Scooby who wears a traditional collar that is blue. As Scrappy Rex he is muscular, has large eyebrows but is slightly larger than he was before in his chest is also the Daemon Ritus. In the cartoon he was a small Great Dane Puppy with a blue collar the same as his uncle.

Thanks to Scrappy being the villain in the movie (and of course being unpopular), he isn't seen again in any more Scooby Doo projects. Although he is sometimes referred to, regarding on how nobody likes him.

Retrieved from "https://villains.fandom.com/wiki/Scrappy-Doo_(live_action_film)?oldid=1711026"
Community content is available under CC-BY-SA unless otherwise noted.