Scratcher the Jealous Reindeer, or better known as Scratcher, is the secondary antagonist in the 1979 holiday film Rudolph and Frosty's Christmas in July. he is the accomplice and the henchmen of Winterbolt.

He was voiced by the late Alan Sues.

When Winterbolt convinces Rudolph and Frosty to leave the North Pole and join the circus, he looks for someone to help him get rid of Rudolph. He invokes the Genie of the Ice Scepter to help him search for a mean and corrupt reindeer, and is told that there is one in a place called the Cave of Lost Rejections. Winterbolt finds Scratcher, significantly in cave 13. Scratcher tells him that he was originally chosen to fly the sleigh on Christmas Eve, but due to his sneaky nature, he was caught stealing toys and candy canes and was then banished, leading to Rudolph taking his spot; making him hate the red-nosed reindeer. After agreeing to help Winterbolt, Scratcher is then sent to the circus where he convinces Rudolph to let him stay and help out with his work; though he hates doing it. Before the show goes on, Scratcher secretly meets with greedy would-be buyer named Sam Spangles, and lets him in on Winterbolt's diabolical plan, promising him that he will be able to get the circus and their money for his participation. Scratcher tells Rudolph that the circus owner Miss Lorraine wants him to bring the circus money to the police, but he makes him get the money earlier than originally said, and he naively gives it to Sam Spangles disguised as a policeman.

When Winterbolt arrives for the circus finale, he tells Rudolph to light his nose, but the reindeer to his distress is unable to. Scratcher and Spangles then appear explaining how they have tricked him into committing a crime, laughing evilly at their success and leaving Rudolph to be blamed for everything. Later, Scratcher is with Winterbolt in his lair, observing Frosty through the sorcerer's snow globe. Winterbolt wonders aloud what Frosty could exchange for Rudolph's nose to be restored, and Scratcher suggests consulting the genie again. That is the last we see of Scratcher; whatever happened to him afterwards is unknown. 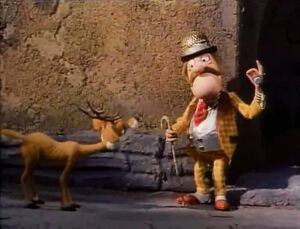