Gliding with her folded skin

Steal the acorn from Scrat and keep it for herself (possibly succeeded).

She is a saber-toothed flying squirrel and Scrat's ex-wife and arch-rival who engages her in a rivalry whoever wins the acorn throughout the film.

She was voiced by Karen Disher.

Scratte is a romantic, aggressive, mischievous, and greedy saber-toothed squirrel and equally focused on acorns like her male counterpart, Scrat. Though she may be loving and sweet at first, Scratte turns out to be selfish and egotistical in her personality, which has her advantage to steal Scrat's acorn rather than showing affableness and love to Scrat. She is also clever of her seduction to trick Scrat into the stealing the acorn back several times, but Scrat remembered her same trick and outsmarted the female squirrel at the end.

However, Scratte is thankful when she and Scrat fell in love after the latter saved her life, but is very bossy toward Scrat who later dumped her and finally goes back into his obsession with the acorn again. She's not completely evil, and she's more like a comical villain than a true villain.

Scratte is a saber-toothed flying squirrel with orange-brown fur and white saber teeth with blue eyeshadow, ocean blue eyes and a tail with a curly angle, like a question mark. Due to her being a female, her body figure is rather curvy, complete with a large butt and hips and a busty chest.

In the beginning, Scrat has been searching out for his acorn near a cliff ledge, only to find it taken by Scratte, female of his species. When they meet at first, Scrat snatched the acorn back, leaving Scratte whimpering for the acorn back. In pity, Scrat handed it back, but would not let go until he was engaged in a tug-of-war over the acorn with Scratte.

With one strong pull, Scrat pulls back his acorn and sent Scratte flying over down the cliff's drop. Scratte played the victim as she fell, seemingly helpless as Scrat dove down to save her. Scratte was offered the edge of the acorn to hold onto, but instead took the acorn from Scrat as they were falling, winked coyly and stretched out folded skin from her sides, gliding off as Scrat, who had no such skin folds, fell down the cliff.

In the first battle, Scrat wins in the bubbling tarpit aganist Scratte, but that results in him falling into the Dinosaur World.

In the second battle, Scratte wins by ripping off Scrat's chest fur while he's stuck on a tree covered with sticky tar from the last battle.

The third battle is when they dance the tango. Scratte almost wins, but Scrat manages to stop her from gliding away, knocking her out right into the edge. Scrat ends up hanging onto an edge looming above some boiling lava while holding Scratte who is unconscious. Scrat manages to get back up by using her saber teeth and claims the acorn, but Scratte lands in his arms and knocks the acorn out of his hands. She wakes up and sees the lava before realizing Scrat saved her from certain death, despite their rivalry. The squirrels find love and were shown to be happy together.

Before long, however, Scratte becomes very bossy, and Scrat gets tired of her. He looks out and sees his acorn, so he decides to dump Scratte. The two have the last fight while blasting up into the air.

When the two of them both grab the acorn on top of the rock, Scratte tries to fool Scrat again by pulling a sweet smile. But Scrat doesn't get fooled, and he winks at her and then grabs the acorn. Scratte falls off and goes back down into the Dinosaur World. Scrat ends up back on the Ice Age, leaving Scratte beneath the Dinosaur World. Scrat dances and jeers but a piece of ice almost lands on him, instead landing on his acorn. It covers the hole where Scrat came out of so he cannot go down and get it. He screams in frustration, losing the acorn.

It's unknown if Scratte will ever survive in the Dinosaur World.

Scratte doesn't actually return after her exile from the Dinosaur World, but made a brief appearance as a Siren. A siren created a fake image of her in order to lure Scrat to his death. Scrat, although interested in seeing her again at first, almost immediately turned her down (possibly remembering the incident between them in the last film). The Siren turned into an acorn, which grabbed his attention much more.

Scratte don't actually appear in the movie but she makes an appearance in the credits in a design showing her and Scrat together with the acorn.

Scratte still don't appear in this short film, but she's indirectly mentioned when the main antagonists, a group of female alien sabertooth squirrels named Scratazons, are identical to her. It's currently unknown what happened to her and if she will ever return physically in future movies, however seeing how much referenced and mentioned she was in the latest installments she'll probably make a comeback late or soon. 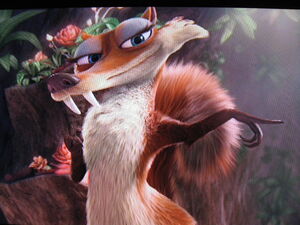 A Siren disguised as Scratte. 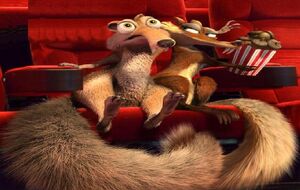 Scratte and Scrat at the movie theatre. 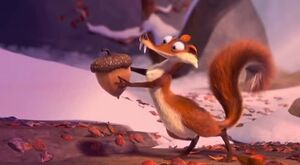 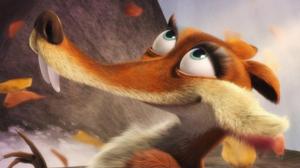