Villains Wiki
Register
Don't have an account?
Sign In
Advertisement
in: How To Train Your Dragon Villains, Dragons, Monsters,
and 40 more

Find its mother (succeeded) at all cost even if it means destroying islands like Berk. (formerly)

Help the Berserker Bewilderbeast protect her egg from the Dragon Hunters and the Dragon Flyers. (succeeded)

The Screaming Death appears to have incredibly tough and strong scales, the thickest of any dragon. The scales appear to give it extreme protection against most attacks, including an average-powered Night Fury plasma blast barely affected it, as well as Nadder spines and many other types of firepower. Furthermore, their scales are dense enough as to be impenetrable by Dragon Root-tipped arrows, making the Screaming Death one of the very few dragons indirectly immune to its effects. Though they have the toughest skin of nearly any dragon, the Scauldron's hot water blast can create enough heat to rip the scales off the Screaming Death.

When Savage and several other Outcast members return to Berk to check on the eggs of the Whispering Deaths, they noticed that the eggs have just hatched in the caves beneath the village. But much to Savage's surprise, one of the eggshell remains was truly massive. They also noticed that a hole in the ceiling that the infant was burrowing. The hole was roughly the size of an adult Whispering Death tunnel, but since the dragon had just hatched they assumed that the infant dragon came from a Screaming Death egg.

The Return of Screaming Death

In "Cast Out Part I", the Screaming Death attacks Snotlout and Hookfang and would have killed Snotlout had Alvin the Treacherous not saved him. It was later seen smashing out of a sea stack.

Several years after the war against Dagur the Deranged, the Screaming Death and his family have settled on their own island. Hiccup and Snotlout journeyed to the island to acquire his shed scales to protect their dragons from the Dragon Hunters, but the Screaming Death attempted to chase them out until his mother scolded him.

The Screaming Death was one of the dragons that responded to the Berserker Bewilderbeast's distress call in "King of Dragons, Part 2". It came also in the representing the Whispering Deaths because they cannot come out in the sunlight. 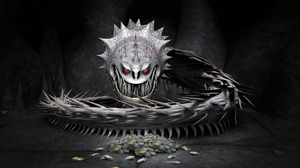 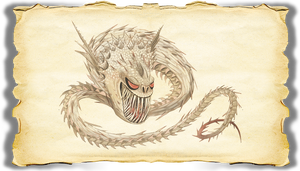 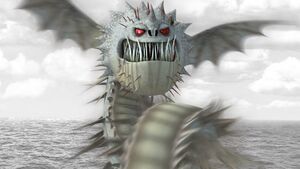 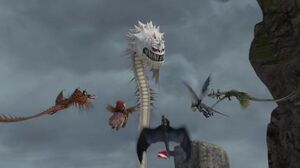 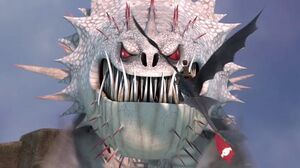 Screaming Death glaring at his mortal enemies Hiccup and Toothless. 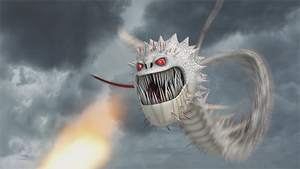