Betray Blade to get him to vampires to make them to Daywalkers via his blood (failed).

Scud is a supporting antagonist in the 2002 film Blade II. He was Blade's former partner.

He was portrayed by Norman Reedus, who also played Striker in Helluva Boss.

Scud was saved prior to the film by Blade before he could be killed by two vampires and assumed the role of Blade's sidekick and weapons provider when the two hunted down Abraham Whistler. Though he was able to gain Blade's trust, his relationship with Whistler had the rocky start due to the latter believed him to be not trustworthy.

Blade, Scud and Whistler were later invited by Eli Damaskinos who proposed a truce due to the emergence of the Reaper Strain and the threats they posed to vampires and humanity had former race went extinct. Scud and Whistler believes that lending a hand to Damaskinos is not a good idea, but Blade decides that they just have to get along with their enemies. Damaskinos' soldiers, Bloodpack, whom sent by Eli and led by Nyssa, also thought about the same thing.

As they arrived at the masochistic brothel where Reapers supposedly will attack next, Blade, Nyssa and Bloodpack entered the place whereas Whistler took a sniping position from the top of neighboring building. Few hours before Blade, Nyssa and Bloodpack squad started the battle with Reapers and their leader Jared Nomak, Scud lost contact with Whistler, who left his position due to being distracted by sight of a reaper who, for some reasons, was unable to catch up with others. Unfortunately for Scud, Whistler didn't returned to his position after examined the Reaper on time as a group of Reapers attacked him on his truck, and would have died had he not activated UV Lights installed on the truck to burn them all into crisp. Scud would later berated Whistler for this.

With the knowledge of Reapers' weakness to UV lights, Scud later helps Whistler successfully modify a UV Grenade in order to kill reapers to armed Blade, Nyssa Damaskinos, Asad, Whistler and the Bloodpack before infiltrate the reaper nest.

After the reapers are dead, Nyssa, Blade, Whistler and Scud are captured and taken back to Overlord Eli Damaskinos' lair where they plan to use Blade's blood to perfect the Reaper virus. Blade attempts to detonate the bomb on the back of Reindhart's head to no avail. Scud reveals himself to be a familiar working for Damaskinos (hid his vampiric hieroglyph tattoo in his tongue) and has been playing both sides in order to help lure Blade to the lair, telling him the bomb on Reindhart's neck is a dud as he holds it in his hand as well as had Damaskinos to ransacked Blade and Whistler's own lair. Blade tells him that he has been suspicious of him since the beginning of their involvement with Damaskinos and that he bomb in his hand isn't a dud as he pulls out a second detonator and detonates the bomb, killing Scud. 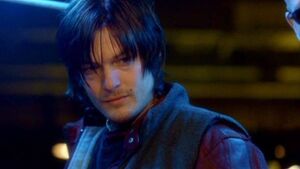 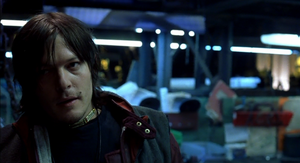 Scud working alongside Blade in his hideout 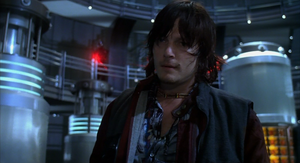 Scud taunting Blade after revealing himself as a traitor 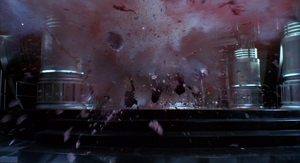